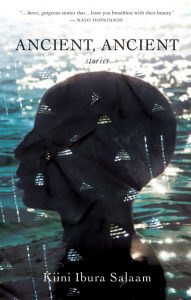 It’s possible that science fiction as a genre could be misconceived as being narrowly defined; viewed as simply stories about techno-bots and dystopian worlds. This, however, is not as likely when it comes to science fiction literature from the African

diaspora. These narratives tend to reveal spiritual and/or supernatural characters and storylines where the metaphysical is allowed free reign and where there are minimal limitations when it comes to character traits, plot and setting—despite the fact that the core themes of a story are clearly recognizable to the reader. The late Octavia Butler (Kindred, Wild Seed) laid the foundation for this kind of expansive way of writing the fantastic into the real, and the short story collection, Ancient, Ancient by Kiini Ibura Salaam, upholds the standard set by her.

The title short, “Ancient, Ancient,” tells the story of Asima, a woman who has a secret to share with her friend Roger but finds herself drawn to and later consumed by a vengeful ancestral spirit seeking a kind of redemption from what it calls the “flesh dwellers.”

Salaam uniquely presents three narrators in this story, each with a voice that reveals a specific element and more importantly, a specific “character” journey. There’s the voice of the spirit who is seeking a body to inhabit. There’s also the voice of the narrator who is telling Asima’s story. The third is a somewhat odd but deeply appropriate voice that tells the story of the “wandering ant.” Nearly allegorical, this third voice metaphorically reflects the actions occurring parallel to its narrative in the rest of the story.

In the migration of ants, there is always one that can be distracted. One whose biological imperative hiccups, if only for a moment and allows it to wander the track, into some new delight or danger.

The distraction of this ant as told by this third voice perfectly mirrors the action of Asima noticing the activity of the spirit who inhabited a lamppost nearby. Her attention is drawn to this lamppost, not casually, but almost instinctually; as if there is something deep in her desires that is inextricably linked to the spirit. This is one of several points in the story where the three points of view converge and the reader can make clear linkages between them.

In reference to transitions, there are some minor challenges in the story where clarity is lost momentarily as one is going back and forth between the voices while attempting to grasp what’s happening to the characters. However, this vagueness is only a temporary—though possibly structural—stumbling block in an otherwise intriguing tale.

Salaam’s ability to firmly ground the idea of the spirit world coexisting with what we might perceive as normal or real, is a theme throughout the collection.

This is also done brilliantly in the story, “Battle Royale.” Entrenched in the horrific realities of the transatlantic slave trade is the supernatural experience of a young man who, as punishment for disobeying his grandfather and fighting in the Battle Royale (yes, that one. Although it’s not overtly stated, it seems as though the narrator in this story is the same unnamed narrator from Ralph Ellison’s Invisible Man), is forced to travel back in time to inhabit the body of an enslaved African.

I look at the person speaking to me and almost gag. I look away, but a glance around the room sickens me further. The room is crawling with mangled people. No facial feature is where it should be—limbs are attached at odd angles on all the wrong parts of the body. I force the muscles in my face to be still. Then I look again.

The use of descriptive imagery here (“crawling with mangled people,” “limbs…attached at odd angles”) to describe the way Africans were packed onto cargo ships is not only vivid, it captures the distortion of perception held by someone who knows a degree of freedom yet is being forced to experience bondage for the first time.

All in all, readers will find themselves captivated by this fascinating collection of stories and enthralled by the author’s ability to elevate our notions of what is real or not in a way that’s nuanced. Each story in Ancient, Ancient makes us believe, if only for the time it takes to read them, that there could be something more to our own life narratives. This is the mark of good fiction.