Beverley Nambozo Nsengiyunva is dedicated to her Africanness. A Ugandan writer and mother of two, she dared to found Babishai Niwe (BN) Poetry Foundation (formerly the Beverley Nambozo Poetry Award for Ugandan women), which began in 2008 as a platform for promoting poetry in her beloved homeland. In 2014, the award expanded to encompass entire continent –targeting both men and women. Not satisfied with the award accomplishments, the foundation recently published an anthology of poetry, A Thousand Voices Rising: An Anthology of Contemporary African Poetry, which consists of poets from a variety of African countries.

Beverley is also the founder of the Babishai Niwe Women’s Leadership Academy –Babishai Niwe means “creating change.” She was nominated in August 2009 for the Arts Press Association (APA) Awards for revitalizing poetry in Uganda after initiating the Beverley Nambozo Poetry Award, the first poetry award for Ugandan women.

Beatrice Lamwaka: At what point in your life did you decide that you must start a poetry award?
Beverley Nambozo Nsengiyunva: This is a fascinating question. In 2008, during maternity leave and reflecting on the enormous amount of knowledge I had received from the NGO I worked at, I too wanted to give back to women. Combined with my passion for poetry and the overwhelming lack of it in public spaces in Uganda, I decided to motivate closet poets. Given that poets hardly earned an income from it, a cash prize would be a real motivator. That is how the poetry award for Ugandan women began.

BL: Are there any regrets with starting this award?
BNN: Every single year when I struggle with financial resources and when I face utmost difficulty in translating poetry’s importance to people in my everyday life. It is at those times that I start applying for jobs again, in order to be ‘normal.’ And then that inner stubborn reminder of the successes and the potential of the award, keeps me going, as well as tremendous support from friends, family and the past winners. 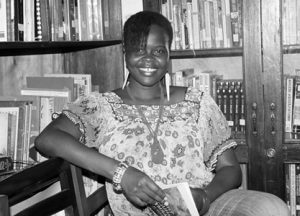 BL: What made you open up the award to men as well?
BNN: They make up a huge part of my thinking space and even more, when I visit another country from the continent, the value of poetry increases because it’s so much larger than what we think in Uganda. It’s so much more intricate than the way we view it in Uganda.

BL: What has changed since you opened up space for men and the rest of Africa?
BNN: Firstly, I discovered many Ugandan poets like Moses Kyeyune Muyanja, whose three poems were long-listed in this year’s award; secondly, that very many poets across the continent were waiting for the BNPA team to open it up. This year, we were the only organization based on the continent, with an annual African poetry award. There is growing support from art communities around the world, because it’s a worthwhile indigenous-based creative cause.

The number of submissions increased by over a hundred percent with close to 1,500 submissions this year and the interest in the award across the globe has heightened tremendously.

BL: How has the anthology, A Thousand Voices Rising: An Anthology of Contemporary African Poetry, been received?
BNN: A Thousand Voices Rising, as of the time of writing this, is the latest African poetry anthology released, in the world. Many readers are enthralled that more poetry from East Africa is being anthologized because the majority of people expect not only to see a poetry performance but to also read it. One friend said that the anthology has saved the written poetry word in Africa from extinction. It’s the individual poets that contributed and showed so much support, to whom we, as a team, are indebted.

The more interesting reception is from non-poets whom I meet and they share how the poetry is so relatable, quirky, daring and a reflection of their own daily experiences.

BL: Do you have some favorite poems, there?
BNN: “The Careless Cook” by James Dwalu from Liberia.  It’s succinct and voluminous in multiple meanings. Also, “Soft Tonight” by Ugandan poet, Lillian Aujo. This poem won the BN Poetry Award in 2009 and it’s unforgettable. “I Laugh at Amin” by Dr. Susan Kiguli is also truly amazing.

BL: What keeps you motivated to do more each day?
BNN: The unrelenting hope and belief that together with the BNPA team, we can and we shall. Exercise gives me renewed physical and mental energy as well. If I don’t spend two hours walking, then I swim continuous laps for over an hour.

BL: What are some of the things that make you say, yes, I did it: I am glad I did it?
BNN: Interviews like this one. Honestly, magazines like this, TV stations like NPR in the US and local media houses like The Monitor and New Vision, continually interview me and share about the award. It’s because they are far-sighted and see it as a magnificent initiative. When that happens, I say Yes!!! We did it.

When financial support comes from major institutions and philanthropists from and outside Uganda, I feel so blest to know that someone can give so much support towards a cause they deem extremely worthy.

When I see poets from all over Uganda gathering for a BNPA event, I say, Yes! We did it.

BL: What are your dreams for BNP award?
BNN: To produce a poetry anthology based on the theme of Kampala. It’s going to attract artists from all over the world who have had an experience of this multi-ethnic and multi-diverse city. It will be in collaboration with not only poets but fine artists and musicians.

To organize poetry residential mentorship camps across the continent.

To produce a toolkit for children who read and write poetry, so that they can be given the benefit of learning the ropes from a young age.

BL: If things could be done differently; what do you wish were in place/can be done to promote poetry in Africa?
BNN: We need more mentorship for poetry in Africa. A lot of emphasis is placed on prose and so poetry camps and residencies are extremely important.

We need more local language poetry that is performed and documented. Many wonderful oral performances go undocumented, unrecorded and untelevised, which is a shame.