Brooklyn Moon -For One Night Only
by Ron Kavanaugh

Thursday, March 8, 2012 – There’s no going back. The 90s poetry scene, laden with promise, talent, and camaraderie has been displaced by motherhood, mortgages, and tenure. But for a moment, the scene, which was originally centered at Brooklyn Moon Cafe, Nuyorican Poets Cafe, and numerous other closet-sized spots with three tables and six chairs, was revisited in the 400-seat Cantor Auditorium at the Brooklyn Museum. As poet Jasiri observed, “I’m feeling straight up George & Weezy in here.”

Organized and hosted by Jessica Care Moore & Danny Simmons, the night seemed less about the audience, and more about the infatuation with memory. Revisiting a “groovy” period where artistic practice was solidified and struggles were defeated by strength in numbers. If the Brooklyn Museum was not available this event would have happened in someone’s basement apartment.  So strong was the affection and longing permeating the room.

Before the event, Jessica seemed too calm, maybe not realizing what she had pulled off. Twenty poets –flung across America and the globe– sharing the stage for the old-school glory of sharing a stage. It’s no easy feat to gather embers and restart a fire that a generation of younger poets may have little idea existed, but the duo did good. Sadly, the spark most of the poets needed was provided by the death of poet, activist, and scholar Louis Reyes Rivera who transitioned on March 3, 2012 at age 66. A legendary voice in the poetry community, almost everyone shared intimate memories of Reyes Rivera. His spirit served as “light” for the evening. 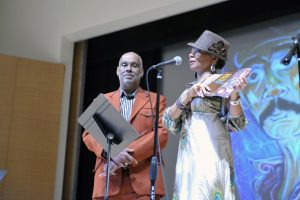 Many years ago, Jessica, who was featured in Mosaic #2 in 1998, returned home to Detroit (Tigers’ logo tattooed with love on her right arm). She’s spent the years fully committed to business, teaching, singing, organizing, mothering, being an artist. Always a woman in movement. Danny Simmons is the urban-arts don dada. A hydra of interests and talents: poet, painter, curator, producer, and newly slimmed-down beau brommel; in 2007, Danny was interviewed in Mosaic #19 after Jessica published his first book of poetry I Dreamed My People Were Calling But I Couldn’t Find My Way Home. Co-producing HBO Def Poetry Jam gave Danny the opportunity to present many of the poets featured tonight.

Only folks who are love(d) could pull this off –ego check one-two, one-two. And  considering that talent and hubris are oft best buddies, this could have taken a wrong turn. Long screeds pro this, anti that. The final mix was a family reunion bookended by beautiful poems and strong hugs.

Firmly in their forties, many of the poets pursued their dreams relentlessly –hustling between gigs, teaching, and creating. They’re committed to the word, as well as developing the “next” generation of young poets. Jessica asked that the children of the poets stand and be acknowledged. A dozen or so children stood, including a couple of teenagers. Funny senior-moment: Danny broke his reading glasses and had to borrow a pair from another poet.

The old days of a cafe staying open until the last poet read wasn’t happening tonight. The Museum closed at 10pm SET (Strict European Time). There was no stretching it. Jessica and Danny did their best to stay on course. But poets have things to say –time be damned. The night started with The Last Poets, (Umar Bin Hassan and Abiodun Oyewole) who received a standing ovation and are roundly acknowledged as the fathers of spoken word. They were followed by Tai Allen; Bonafide Rojas; Ekere Tallie; Mums, who read w/Aurora; Jasiri; Latasha N. Nevada Diggs (yes, this is the proper spelling) rocked a serious “Borsalino;” MT’Kalla Keaton; Mike Ladd, who flew in from Paris, his current home; Kevin Powell recognized literature’s “golden lady” Marie Brown’s guidance in the careers of many of the poets; Danny; Jessica; Mariposa; Liza Jesse Peterson; Sharif Simmons read his signature poem “This Is A Movement.” He was followed by Willie Perdomo, who, throughout the night, was acknowledged by many as a major touchstone of inspiration for this generation.

It’s hard to be in a place, and the next morning deem it as historic but I can’t imagine this many poets, from such a concentrated moment, now a poetry Diaspora, will ever come together again with the same fire. The 90s open-mic scene was definitely a moment. It, in part, inspired me to start Mosaic, read poetry, and venture to BK from the Boogie; but it was only a moment. Young peeps are writing poetry and rhymes creating new temples that will have equal gravitas as the ones that shaped many of my generation.

Shouts to asha bandele, Tish Benson, Saul Williams, Dana Bryant, Michael Thompson (owner of Brooklyn Moon, which is surviving the gentrification wave in Fort Greene), and the many who can say “I was there” but wasn’t tonight.

One thought on “Brooklyn Moon -For One Night Only”