When a reality star becomes your president and his advisor describes the exaggerations about the size of his inauguration crowd as “alternative facts,” could there be a better time to discuss bunk?

Trump’s ascendancy was fueled on the bunk of white supremacist myths. From Trump’s xenophobic statements characterizing immigrants—those of color and from Haiti or Mexico, as opposed to, maybe, Norway—as criminals, to his implicit argument that whiteness allows someone with no political experience to be a more “legitimate” president than a former senator and editor of the Harvard Law Review, we see how falsehoods can endow a mercurial personality with power and influence. 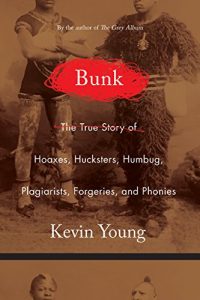 Kevin Young’s Bunk: The Rise of Hoaxes, Humbug, Plagiarists, Phonies, Post-Facts, and Fake News argues the term originates during a discussion of slavery and the Missouri Compromise but even as modern genetics reveals race as an artificial construct–a hoax–people continue to fall in love with racial myths and fantasies.

While Young’s new work presents posers and pretenders through history, it culminates with a discussion of the current political climate, including Melania Trump’s plagiarism of Michelle Obama. Bunk is at its most radiant when it dissects and untangles history, and argues, persuasively, that the greatest hoax of all is the invention of race. This deception has real and tangible effects; racism envelopes millions of people in depression and poverty, even as race is artificial, a twisted phenomenon of egotistical fantasies and fears. At the end of the 19th century and the start of the 20th, these racist fantasies led more than one hundred million people to William Henry Johnson, a black man from New Jersey who dressed in animal skins as part of P.T. Barnum’s “What is it?” exhibit. Bunk demonstrates how the curiosity surrounding Johnson’s act and similar ones stemmed from a desire to distance and diminish people of color.

Some of the hoaxes Young discusses only tangentially examine race, and seem to pivot, instead on broader acts of plagiarism. Yet Young reveals how plagiarism also reinforces racial myths, these hoaxes “wrestle with race in much the way more pointed hoaxes do—seizing on panic and stoking it, expressing a country’s anxiety, subtly or blatantly, over race and the workplace.” One way plagiarism reinforces racism is by extolling whiteness: Many plagiarists claim to have discovered long-lost texts from white authors, which positions whiteness as the source of art and culture. The hoaxers, Young reminds us, forge Lord Byron and Elizabeth Barrett Browning, William Shakespeare and Gertrude Stein, and when a writer of color, such as Paisley Rekda, is plagiarized, the plagiarism is often dismissed as collage, not theft.

Ironically, some plagiarists remain dismissive of the work of writers of color while also impersonating said writers. Bunk suggests Kent Johnson as the white creator of the non-existent Japanese poet Araki Yasusada. Johnson, Young tells us, constructed a myth that emphasized Yasusada’s pain: Yasusada was a survivor of Hiroshima, where he supposedly lost his wife and daughter in the bombing and survived the death of another child from the effects of radiation; his son discovers his work–and publishes it–only after his death from cancer. Despite Yasusada’s Asian heritage, his fictionalized biography mentions white writers “Jack Spicer, Roland Barthes, and Robert Smithson,” among Yasusada’s influences but doesn’t list any Asians. Bunk also reveals how white author Michael Derrick Hudson made up Asian poet Yi-Fen Chou for the purpose of publishing his own work. Hudson refers to his nom de plume as “a strategy” for placing poems, and Young describes Hudson’s perspective as “a whiteness that seeks privilege however and wherever it wishes.” Young also locates this privilege in Tim Barrus, who wrote under a fake Indian name, and the British writers of the Bloomsbury Group who made up Swahili words as they boarded the Dreadnought ship disguised, supposedly, as Ethiopian royalty.

The quality that makes Bunk engaging is also its flaw: Young’s intellectual curiosity.  Bunk: The Rise of Hoaxes, Humbug, Plagiarists, Phonies, Post-Facts, and Fake News could have been stronger with fewer examples and an expanded discussion. The Dreadnought example detracts from Young’s implied thesis of the hoax as embodying particularly American characteristics, including showmanship, performance, and a maddening desire for money and fame. Milli Vanilli, one of the greatest hoaxes of all, is mentioned only once, and while Bunk discusses other black hoaxers, such as journalists Janet Cooke and Jayson Blair, Young doesn’t fully address how Cooke and Blair were used to denigrate affirmative action and why black hoaxers, in general, seem subjected to greater public censure.

Rochelle is author of AfroSurrealism: The African Diaspora’s Surrealist Fiction (Routledge, 2018) and co-editor of All About Skin: Short Fiction by Women of Color (Univ. of Wisconsin Press, 2014).