Camille T. Dungy is the author of What to Eat, What to Drink, What to Leave for Poison; Suck on the Marrow, for which she received a 2011 American Book Award; and Smith Blue. She is a National Endowment for the Arts fellow, and was a finalist for the PEN Center USA 2007 Literary Award. Always a fan of her poetry, when Mosaic gave me the opportunity to ask Camille a few questions I moved fast. 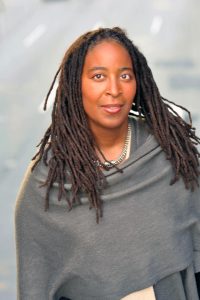 L’Oréal Snell: There are several poems that I really enjoyed, but I am curious as to story behind the title of the book, Smith Blue and the linking to the poem, “The Blue.”
Camille T. Dungy: The whole poem is about the fragility of life and love and our connections to what might be seen to be permanent, but are fleeting. That became the place out of which I got the title for the whole book, because the book itself is about the fleetingness of our sense of security, of our love, of the land that we live on and we are or are not caring for, the people that we live with and who we are or are not caring for.  That fragility and security that I talk about in the poem, “The Blue,” is the basis of the book entirely.

LS:  One of my favorite poems from Smith Blue, “Maybe Tuesday Will Be My Good News Day,” has a read on a lyrical beat. I found myself snapping with each line and could hear symbols and how fluid the poem scatted line by line.  Was there any intention to evoke a blues beat for the poem’s rhythm?
CD: In terms of the music, the poem is based on the jazz song, “The Man I Love.” I was inspired partly by  a jazz standard as I was writing it.  Smith Blue looks at the blues themselves, a musical formed in a time of economic, racial, and cultural struggles and hardships and the pressures acting on the musicians that evoked sadness and despair, but also joy, hope and coping. We have figured out ways to smith the blues, to make blues. We make hardship and we add what makes the world harder, but have also figured out how to add ways to make the world better which is the making of the song in “Maybe Tuesday Will Be My Good News Day.”

LS: What is the connection between your poems and your upbringing?
CD: I grew up surrounded by outdoor space and the ability to move around in it. I started to realize that my way of interpreting the world and its history was directly linked to my understanding about the way we treat the non-human world and how it has been used for and against us.  Or with and against us. I also began to really pay attention and discovered a historical landscape where I lived at the time and how it was linked together. I then started writing in that way and joined a community of people who are writing and thinking in this way. I began to notice a major absence of direct conversation about Black people who wrote about nature. I knew that they were out there, because I read work by them and I was talking to them, but they weren’t in anthologies, so that major omission seemed to be something that needed to be corrected.

LS: How similar or different was the writing process and constructing of Suck on the Marrow and Smith Blue?
CD: Both books were different production processes. Suck on the Marrow is sectioned into chapters and narratives, Smith Blue is basically one big chunk of poems and the arc is more thematic than plot-driven. Suck on the Marrow was the result of years of research, and the narratives are entirely made up as a result. It’s my invention, though people have asked me questions about the characters that suggest they think they are real. I’m glad that people feel like they can go to the stacks and research these narratives. Smith Blue is constructed in an entirely different way from my first two books. A great number of poems that were written for this book were constructed when I was in that “tractor pull” of writing everything — Suck on the Marrow, Black Nature: Four Centuries of African American Nature Poetry and From the Fishouse: An Anthology of Poems that Sing, Rhyme, Resound, Syncopate, Alliterate, and Just Plain Sound Great. I put them to bed and I spent a summer working on my writing project. I just took all of the poems that I had from the past 10 years and spread them out all over the study and started to realize that I had a connection in a lot of these poems that I had not been consciously thinking of when I wrote them.  Again, there was that thematic arc.  Eventually, I was able fill in the gaps to make Smith Blue a cohesive product.  In both books, it’s the landscape of history that is compelling to me and is a rich territory that is of particular interest to me.