Caryl Phillips appears to be a man of a composed and modest nature. He’s relaxed in his T-shirt and leather jacket; he also presents the aura of a seasoned traveler. When he talks about the craft of writing and literature in general, his voice is calm and measured. But on the page, his voice resounds with compassion, elegant pacing, and vigorousness. 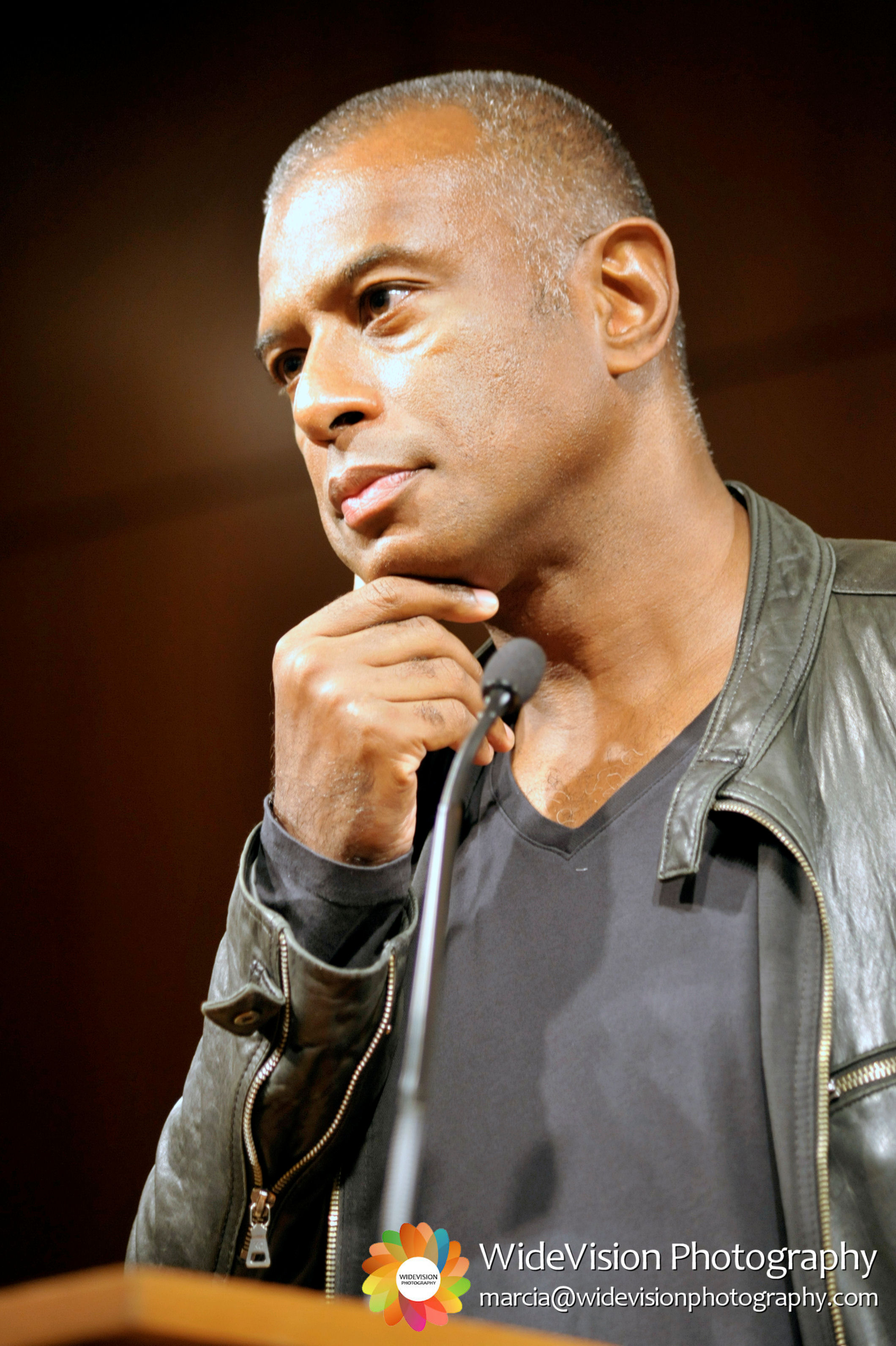 In both his fiction and nonfiction, a dominant theme in Phillips’s absorbing prose is the exploration of the varied perspectives of the immigrant experience, the feelings of acceptance and isolation in the places one chooses to live. He was born on the Caribbean island of St. Kitts, and after his family moved to England he grew up in Leeds, in northern England; and attended The Queen’s College, University of Oxford, where he studied English literature.

A prolific writer, Phillips is the editor of two anthologies and the author of more than a dozen titles, including plays, five nonfiction books, and nine novels. He has written for radio and film: In 1984, his radio play The Wasted Years was published in Best Radio Plays of 1984; he wrote the screenplay for the 2001 film The Mystic Masseur, based on the novel of the same name, which was written by Trinidadian author and Nobel laureate V. S. Naipaul. In his early twenties, he “declared that I wanted to be writer,” and over the course of his career, he’s received well-deserved accolades and literary awards for his works. In 1985, the Greater London Council awarded Phillips the Malcolm X Prize for Literature for this his debut novel, The Final Passage. For his acclaimed book Cambridge (1991), the story of a slave in the West Indies in the 19th century, he won the Sunday Times Young Writer of the Year Award, in 1992. His novel Crossing the River, about a father who sold his children into slavery and their stories that beautifully unfold, was shortlisted for England’s prestigious Man Booker Prize in 1993. His novel A Distant Shore won the 2004 Commonwealth Writers Prize; Dancing in the Dark, a fictionalized account about the life of Bert Williams, an African-American vaudeville entertainer, won the 2006 PEN/Beyond Margins Award. This is quite impressive for a person who stated that “Writing provides a means by which I can sit in judgment upon myself and reach conclusions (however temporary) that enable me to shuffle towards the next day and another crisis.”

Phillips is a fellow of the Royal Society of Literature and has won the Martin Luther King Memorial Prize, a Guggenheim Fellowship, a Lannan Fellowship, and the James Tait Black Memorial Prize.  He has taught at universities in Africa, India, Sweden, and the United States. He is a former Henry R. Luce Professor of Migration and Social Order at Columbia University, was a visiting professor of English at Amherst College in Massachusetts, and is presently professor of English at Yale University.

This past fall, Phillips stood before a packed auditorium at the Dweck Center at the Central Library/Brooklyn Public Library in New York and read from and discussed his latest book, Color Me English: Migration and Belonging Before and After 9/11. He talked also about nationality, creating characters, the elements that make up a novel, and his process when he begins a project. He commented that in his writing, the complexity of the elements of identity fascinates him: identity as it has to with nationality and participation in society; identity as it has to do with the color of ones skin; identity as it applies to the meaning of being a writer; and identity that is personal.

A few days after the talk at the library, he was off traveling, to London and then to Singapore. I caught up with Phillips via e-mails during his travels for a further exchange about his writing and his thoughts about literature.

Clarence V. Reynolds: I was introduced to your writing when I read the story “West,” which was later a chapter in Crossing the River, in Granta in 1993. You were featured as one of that literary journal’s “Best of Young British Novelists.” Looking back, what are your earliest ideas and remembrances about becoming a writer?
Caryl Phillips: My earliest notions of becoming a writer were rooted in the fact—rightly or wrongly—that I felt I had something to say about the experiences of my generation of black Britons back in the late seventies. I thought the best way of expressing my feelings would be to write drama and/or fiction. I’m not sure if the Greater London Council prize exists any longer, but 1985 was the first year it was awarded. And what made it special was the fact that James Baldwin came over from France to present the prize. I don’t think the organizers realized that we already knew each other. It was a special moment for me to be given the prize by a writer I admired.

CVR: Your latest book, Color Me English, is a collection of personal essays about belonging, finding one’s place in the world, cultural awareness, and attitudes toward people of different backgrounds. Some of the essays were written as early as 1995. What role does race and identity play in your story telling?
CP: Questions of identity have always played a large part in my thinking and writing; and, of course, race is a key component of identity. Certainly for me, and certainly in Britain.

CVR: You were born in the Caribbean, raised in England and have traveled across Europe and America. In what ways did your traveling shape your views and/or understanding of literature?
CP: Traveling has helped liberate me from ever being tempted to view literature as a cultural product that is slavishly tied to nation.

CVR: Is there a particular place or setting that you find inspiring?
CP: I’ve written the final drafts of three or four of my books in Bangkok, Thailand. I’ve always enjoyed writing in Thailand.

CVR: In the essay “Fire,” in Color Me English, you state that “ ‘How do I write?’ That is a tricky question.” How so?
CP: Well, I’m not sure where the characters come from. I’ve a reasonable notion of the source of the ideas, but fusing ideas and characters, and making everything cohere into being with the appropriate language is a process that still seems somewhat mysterious to me. ‘How do I write?’ I’m still not always sure.

CVR: The complexities of self-exploration are themes in much of your fiction, what draws you to that subject for some of your protagonists to deal with? What draws you to it as a narrative for a story?
CP: Well, good writing is, as Eudora Welty once said, “Daring to do with one’s bag of fears.” Self-exploration is the beginning of understanding.

CVR: When I read some of your stories, I think how I’m still uncovering aspects of my life. Do you believe that self-exploration and self-discovery are ongoing processes that many of us engage in, some aware of it, some not, and that sometimes reading about it helps us along the way?
CP: I think if we’re living properly we’ll be forever always uncovering aspects of our lives, and selves, which will be surprising.

CVR: In a Harper’s Magazine essay, popular novelist Jonathan Franzen once asked: “Was fiction about mastering the sweep of the culture in an innovative way, or was it about telling a more intimate story and delivering reading pleasure?” In your opinion, what would you say constitutes an absorbing story?
CP: Engagement with character that is rendered in language that has been polished by attention. The two things that I appreciate in good fiction are first, being introduced to characters whose lives I care about. People who I want to understand, and perhaps even get to know. I suppose it’s an old-fashioned conceit of literature in a world in which people are experimenting with all kinds of narrative positions, but I’m apologetically old-school in this sense. I also love graceful language. Not purple, or overly poetic, but language that suggests the author has taken the time to choose the right word.

CVR: Can you choose one or two of those authors? What is it that you enjoy about their writing?
CP: James Baldwin—determination.  Jean Rhys—courage.
CVR: Can you explain a little further? For instance, how is Baldwin’s determination reflected in his writing, or displayed in what works specifically?

CP: Truthfully, there are many things I could say about Baldwin. (I think the essays about him in A New World Order and Color Me English say it best). But basically, he was the first writer I really knew and I got to know him very well. I was able to see how he dealt with disappointments from publishers, how he remained focused on work, and even when things were not always working out for him, he never embraced despair. I love his ability to move seamlessly between the essay and fiction, and admired his reluctance to shy away from a difficult or controversial subject.

CVR: What do you consider is the duty of a writer.  Is it to change a reader’s perception about a person or situation, or perhaps make a political or social statement?
CP: A writer often wants to change a reader’s perception about the world, which is a political act. But we have to work through character, so helping the reader to feel close to fictional characters is the gate through which we have to usher the reader. I am one of those writers who hopes to use character as a way of introducing the reader to a new way of thinking about the world.

CVR: Do you see any differences between the book publishing industry and the reading audiences in the United States and in Europe?
CP: Not really. Publishing is an industry in huge flux and transition. The reading public is being encouraged to “consume” quickly on both sides of the Atlantic. I’m not sure what effect this will eventually have on writing.

CVR: What are your thoughts about today’s publishing industry and the future of printed books?
CP: I think there will be fewer printed books, and more reading on digital equipment. Books will move with increasing swiftness from an author’s desk to the reading public. What this will mean for the role of editors and editing, I’m not sure.

CVR: Do you own an e-reader of any kind and what’s loaded on it?
CP: I don’t own an e-reader, or an iPhone, or a BlackBerry. Maybe that will change, but I’m comfortable without these gadgets at present.

CVR: What are some of your passions?
CP: I used to run marathons, before rupturing my Achilles tendon. I also used to climb mountains. I’ve been up Mount Kilimanjaro four times. These days, I’m a little more sedate. I play golf and I watch a lot of English soccer on TV.

CVR: There are plenty of books published these days, whether in print or as an e-book. What are your thoughts about the current state of literature created by Black American, African or Caribbean authors, writers from the African Diaspora?
CP: I think the state of literature by African, African-American, and African-diasporan writers is as healthy as it’s ever been. We are privileged to have the generation of Morrison, Achebe, Lamming, Walcott, Soyinka, Ngugi, alive and working, and a newer generation behind them who are also working and producing works of excellence; writers such as Edwidge Danticat, Chimamanda Ngozi Adichie, Patrick Chamoiseau, and Colson Whitehead. I’m optimistic about what is going on.

CVR: Caryl, thanks so much for sharing your thoughts. All the best to you.
CP: And to you!

Clarence V. Reynolds, an independent journalist, is the assistant director at the Center for Black Literature at Medgar Evers College, CUNY, and a contributing writer for The Network Journal.