An Interview with Chinyere Evelyn Uku by Thomas Sayers Ellis

The cover image of Thomas Sayers Ellis’s Skin, Inc.: Identity Repair Poems features Ellis’s own black-and-white photograph of Chinyere Evelyn Uku, an African woman from Nigeria who has albinism. On the release of the paperback edition of Skin, Inc., Ellis conducted an interview with Uku about her life, identity, race, and image. This is an excerpt.

Thomas Sayers Ellis: Where were you born and raised? Tell us about your childhood and schooling. Did you grow up in a quiet household or a lively, loud one? 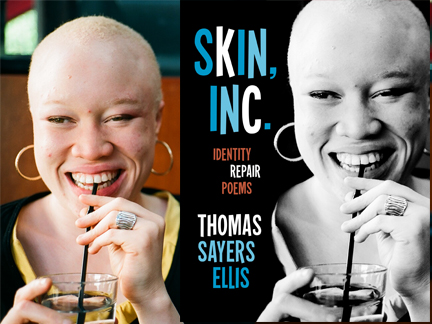 Chinyere Evelyn Uku: I was born in one of the most vibrant yet monumentally confusing places in the world: Lagos, Nigeria. I was born to parents who were very middle class, and we lived in an apartment building in bustling Victoria Island. I was very unaware of my condition, having no real understanding of albinism or any awareness of it. It did not prevent me from watching Muppet Babies so there was no cause for concern. My parents did not put any signs or signals in our home to alert me to the situation, so one can say I was exonerated at that age. I would wake up in the morning, see a cream-colored character, and proceed with my day of larking about and pretending to be productive and doing whatever I had to do to secure my parents’ approval. Life was good. School was also fair, starting with an elementary school of mixed-race children—Indians, Caucasians, Blacks—so then my lack of understanding of the implication of race was further de-emphasized.

TSE: How old were you when you first heard the words “Africa” and “Albino” or developed your own understanding of them and what did they mean to you?

CEU: I had seen a few people with the condition walking the streets, a few local people and a guy who worked at the petrol station. On one particular occasion, he approached me to say hello at the gas station, and unfortunately, he had not been privileged to understand how to care for his condition and I remember thinking, “What the hell?” It did not occur to me, then, that we were essentially the same. High school came and I became more aware of myself, but still it was never thrown in my face until all of the strange questions started to emerge. Once a teacher used me as her “specimen” to demonstrate to the rest of the class what “a person without pigmentation” looks like. I thought it was slightly ridiculous—what was the big deal? All of our shit is the same color. My blood is red. Your blood is red, right? I can handle not skinny-dipping on a beach in California for the rest of my life; I’m not big on water anyway. Oh, and if you see me walking down the street, best you be the bigger person and wave hello because my ass definitely won’t see until you come within a couple of inches of me.

TSE: Explain what you mean when you say you won’t see someone until they are a couple of inches away from you.

CEU: What I mean by that is quite literal. Because of the lack of pigmentation in my eyes, my retina does not absorb much light so my vision is hampered.

CEU: My favorite time of day is most definitely evening, sunset! I am obsessed with sunsets and the crazy hues the evening sky makes, very sexy. And I love jazz. Sunsets and jazz go together so well, like wine and cheese. I don’t like summer for obvious reasons. Don’t go in the frickin’ sun for too long—just cross the street and get your ass in the shade.

TSE: When I first met you, I was certain you were a fashion model, but over time I have come to believe that you are a poet. I am willing to bet that you have or had a notebook of poems in a shoebox or under a bed somewhere in your life. Did you ever write poems, what were they like, and what happened to them?

CEU: I had a hard time accepting that I should pursue a career such as modeling or poetry writing because I just never believed they were real professions. How could I write silly words on paper or stare in a camera lens in a giraffe suit while my counterparts solved differential equations and scratched their heads at night in the midst of test tubes in the hopes that they would find a cure to some debilitating disease? So most of my writing has been abused or trashed and hopefully the pieces have found their way to the nearest rehab center. I have always wanted to write books but have never had the courage.

TSE: There is a long poem in Skin, Inc. that worries the life and legacy of Michael Jackson. Were you a fan of his, can you recall his songs being played in Lagos, and what do you think of his approach, rumor or otherwise, toward dealing with vitiligo, his skin condition? Do you think he bleached himself or just wanted to be so successful, so Pop, that he surgically welcomed white-skin-ness?

CEU: I can remember, vividly, my brother moonwalking to the beat of “Thriller,” which we used to torment ourselves at night. At times we’d turn off all of the lights in the living room and escape, leaving my brother to cry at Michael Jackson’s transformation into the werewolf. I’d hardly say I was a huge Michael Jackson fan, but I did watch in amazement the millions of adoring fans that flocked Wembley Stadium in the nineties to see him perform, and I will never forget the man that actually died of a heart attack during his performance. Michael Jackson was a household name, and we watched his steady transformation. But I was never moved by his “condition” much the same way that I have never been moved by my own. I was unable to understand what was truly at the heart of his need to bleach himself, so I cannot say much or comment on it. He was a great musician no matter what he looked like. Whether he chose or not to become white was not much concern to me. He was a great musician, possibly among the greatest.

TSE: Has anyone, unfamiliar with your condition, ever mistaken you for white? Have you ever been forced to use “A Color” to refer to yourself or your identity?

CEU: On my childhood passport, my eyes and hair are listed as brown, and I remember thinking that they should take into consideration the fact that some people do not quite fit this description of black, brown, or blonde. I have been mistaken for white before. Typically at metro entrances or crowded places depending on the demographic. Most blacks or African Americans can typically identify that I am black or mixed race and feel drawn to me, and the twisted hair and braiding hairstyles I sport from time to time also helps them out. White people in general are initially perplexed and will not stare for more than a few minutes lest they are accused of staring and called rude or politically incorrect or something else they don’t like. They prefer to keep all comments to themselves and avert their eyes to avoid confrontation. You can imagine how shocked I was when someone came out and asked what the hell I was. “I’m sorry, I don’t mean to be rude, but are you Asian, biracial, or some kind of albino?” I laughed and told him what the hell I was, then he laughed too, and we went for ice cream and to see a foreign movie. He paid. I prefer the direct approach, but don’t make it a habit, or I might pop someone in the face. A couple of guys, rather loudly, were trying to determine what I was and yelled out, “No, that’s just a white girl with dreads!” Well, I have no intention of fixing the situation! Blame it all on Mother Nature.

CEU: A nigger, never have I been called. But I have been called albino, which is kind of what I am, so it’s a little difficult to retaliate and I try to be the bigger person. In Africa, reference aside to skin color, a word like “oyibo” is actually endearing, but if I find myself in the U.S. anytime soon and someone there decides to call me that, please be advised that you will receive a slap.

TSE: How would you explain albinism to a child, or would you even use that word, and what age would you say is the right age to discuss race or skin with a young person?

CEU: I’d simply tell the child that some people are born without color and that’s OK. Animals are like that too, and they seem to be doing fine. Some children have asked me why my eyes dance (nystagmus), and I may explain that my eyes are happy instead of going into the technicality (sorry to mislead). Whether you discuss race with a child or not, if he or she lives in a racially diverse environment, the topic is going to come up one way or another. I think it is just important for the child to know that race makes us look different but is not a good judge for a person’s behavior or personality.

TSE: What do you think of the cover of Skin, Inc.?

CEU: I’m a little thrown off by the picture, like it isn’t me.

Skin, Inc., was originally published, in hardcover, by Graywolf Press in 2010.
Thomas Sayers Ellis co-founded The Dark Room Collective (in Cambridge, Massachusetts); and received his M.F.A. from Brown University. He is the author of The Maverick Room (2005), which won the John C. Zacharis First Book Award, and a recipient of a Mrs. Giles Whiting Writers’ Award. His poems and photographs have appeared in numerous journals and anthologies, including Callaloo, Best American Poetry (1997, 2001 and 2010), Grand Street, The Baffler, Jubilat, Tin House, Poetry, and the Nation. He is a faculty member of the Lesley University low-residency M.F.A Program, a photographer for UFCW Local 342 in New York City, and a Cave Canem faculty member. He divides his time between Brooklyn, NY, and Washington D.C., and is currently a Visiting Writer at the University of San Francisco.