Reflected in the best writing is a resonance of humanity—which resides in all of us—that eventually transpires and stays with the reader long after the last page has been turned and the book has been placed on a bookshelf or added to a stack of favorites. 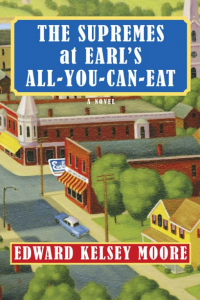 This is the case with Edward Kelsey Moore’s The Supremes at Earl’s All-You-Can-Eat.  Recently, publicist Linda A. Duggins and I were sitting around with a group of friends and, as usual, the conversation turned to favorite books and the state of contemporary literature. Within moments, we were talking about a recent book we were enjoying: an entertaining and poignant story about three women friends who, after 45 years, still meet at the local restaurant where they had formed their friendship to discuss, as they have always done, the joys and troubles in their lives. “The honesty in the story just jumped off the pages in the voices of these women,” Duggins commented. After a few laughs, we wanted to find out more about Moore’s Supremes.

Since its publication in March 2013, The Supremes at Earl’s All-You-Can-Eat has ranked on The New York Times’s best-seller list and The Power List, Spring 2013 (Powerlist.info). Duggins and I caught up with Edward Kelsey Moore after his European book tour.

Duggins: What a way to honor women with this uplifting and hilarious story about three friends who grow up in a small town and together face all kinds of ups and downs. Are any of your characters drawn from or inspired by women in your life or that you knew when you were growing up?
Edward Kelsey Moore: I didn’t fashion any of the characters in The Supremes at Earl’s All-You-Can- Eat after specific women, but I definitely drew inspiration from the women in my life. I had the good fortune of hearing great female storytellers when I was young and I’ve never forgotten how exciting it was to hear them talk to each other.  I loved the way they could amuse, console, and advise all at the same time.

Duggins: Mother Dora is an amazing character. Her tough, hilarious, and deep love was the nucleus of Odette’s world. Who is Dora, really?
Moore: The Supremes is a book about enduring love and friendship. Dora’s continued presence in her daughter’s life serves as a reminder that the past is always with us.  I’m okay with readers just seeing her as a good time, but I think of Dora and the other ghosts as symbolic of the way time evaporates when we are with loved ones and old friends. Because of the power of the connection with someone we have loved for a long time, the moments we share are often as much about twenty years ago as they are about today.

Reynolds: The beauty of the many family members, blood relation and not, in the story was the multifaceted and big lives of the women and the men in the community of Plainview. What was it like for you, a male, to get inside the mindset of women with such a plausible voice?
Moore: I told the story from the perspectives of Odette, Barbara Jean, and Clarice because their voices were the ones that came to me and demanded to be heard. Like any writer, my goal was to be as true to the voices of my characters as I could be. The fact that they are women was not something I thought a great deal about. I just wanted them to have their say.  Still, when it came to writing from women’s points of view, I do think that I might have had a couple of advantages over some other male authors, though.  First, I learned to tell stories from some real experts, who happened to be funny, charming women. Also, even though I’m a first-time novelist, I’m a man in midlife.  Writing across the gender divide doesn’t constitute the same threat to my sense of myself as a man as it might for a younger male writer.  If you reach your fifties and haven’t sorted that stuff out, you’re in real trouble. 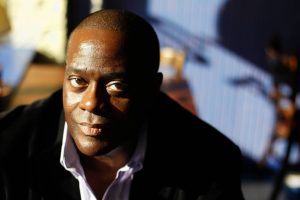 Reynolds: Of all the historic figures to play a role in your book, and in such a comedic way, how did you come about choosing former first lady Eleanor Roosevelt, and why portray her as a seer of death?
Moore: The truth is that Eleanor Roosevelt was just pure fun to write. Once I imagined her as a ghost whose reward for being so kind and charitable in life was the freedom to get into all the afterlife mischief she desired; she was free to do as she wanted. It made sense that she might want to foresee deaths and turn somersaults.

Duggins: There are certain chapters in the book, such as Chapter 11, that are written in the first person, when most of the book is written in the third person, what moved you to alternate in the chapters in which you did?
Moore: I wrote the chapters that are narrated by Odette in first person because her view of the world is unique. She sees things and knows things that the other characters do not. I wanted Odette to be able to communicate her special perspective directly to the reader.

Duggins: Did you have a particular reader in mind when you where writing about the Supremes, the men in their lives, and their families?
Moore: When I write, I only think about the characters. For me, envisioning a reader while I’m writing makes the already difficult process even more intimidating.  If I succeed in making my characters as real as I possibly can, then I feel that I’ve succeeded.  If I’m lucky enough that readers respond to the characters as well, then I’ve been doubly blessed.

Linda A. Duggins is a lifelong booklover, creator of literary events, and director of publicity at Grand Central Publishing.

Clarence V. Reynolds, an independent journalist, is the assistant director at the Center for Black Literature at Medgar Evers College, CUNY, and a copyeditor and writer for The Network Journal.