The poem “Blue Seuss” by Terrance Hayes begins “Blacks stacked in boxes stacked on boxes/ Blacks in boxes stacked on shores” and ends “Blacks in rows of houses are/ Blacks in boxes too”. It is this same kind of African-American journey from the coasts of the motherland to the rocky plains of the western world that guides Yaa Gyasi’s debut novel Homegoing, a multigenerational calabash that spans centuries from Fanteland in Ghana to Harlem, to Huntsville, Alabama. At the heart is the matrilineal story of two sisters, one with distinctly Ghanaian progeny, the other the forbear of American slaves. At the end of it one is left wondering in a non-platitudinal way that maybe we are all related–that, maybe, all our stories can be explained by one small historical blip.

To understand Homegoing is to understand that even at the height of the transatlantic slave trade two totally different lots could be feasible for African women. Effia, the legitimate daughter of a slave-trafficking Fante chief, is sent off to live as the wife of a British man. Her line is haunted by its role in the slave trade. James, Effia’s grandson, renounces his past to live in anonymity with a village girl. James’s daughter, Abena, makes a similar renunciation. Abena’s grandson, Yaw, marries his house attendant as almost pittance for the sins of his ancestors. We’d like to think that only Europeans were haunted by the legacy of slavery, but the victimizers were Black, too, and often shared the same bloodline as their victims. 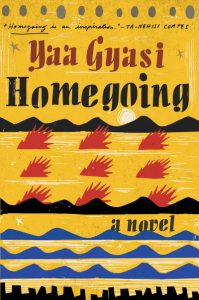 Esi, on the other hand, the bastard child, suffers the more familiar lot and is sold into captivity setting her lineage on an American trajectory. Her daughter, Ness, is kept as a breeder against her will. Two generations later, H. of the same line, is confined to a chain gang in a southern mine. His son, Willie, to the jazz bars of Harlem as a custodian. This is the other, more familiar lot: that of generational servitude.

There’s something familiar about Homegoing, which could be inviting or damning. The novel, though uniquely structured with chapters that alternate between Esi and Effia’s family line, is well aware of its predecessors. First and foremost, one cannot think generational family saga without bringing up Alex Haley’s Roots. Effia’s son, like the legendary Okonkwo from Achebe’s Things Fall Apart, is a wrestler. Esi’s grandson Jo is a caulker in Maryland like Frederick Douglass. There is a reference to killing one’s own children to set them free like Sethe in Beloved. But these aren’t stolen, so much as borrowed tropes, spruced with Gyasi’s own wand waving.

Homegoing, up front, is a story about love. Both family trees house an intimacy that cannot be broken. That sets it somewhat apart from slave novels before it that deal solely with brutality and injustice. It’s just not resilience that keeps the line going, but enduring love. This redirected focus is perhaps Gyasi’s greatest triumph. As she writes through Yaw, the teacher, “We believe the one who has the power. He is the one who gets to write the story”. It’s not a particularly thought; the same ideal has been used to explain history in general. Yet, here Gyasi uses for herself, as she co-opts a common story of subjugation into a story of passion.

Slave narratives can be exhausting. The subject has been poked and prodded so much, one may wonder if there’s anything fresh left to glean. That this dark epoch is alarmingly on the conscience of many contemporary black writers, does show that these colonial skeletons still lurk among us. And rightfully so. For in the grand history of time, slavery has only been an eye blink in the past–and some cases–in the present.
Sidik Fofana received an MFA in Creative Writing from NYU. He teaches in Brooklyn.