When I was finishing up with Emerson College’s Publishing and Writing program, I took a novel writing workshop by the novelist Kim McLarin. We were assigned to read several first novels of notable authors, but the one that stood out for me was James Baldwin’s Go Tell It on the Mountain. My only previous experience with Baldwin had been with Giovanni’s Room, which moved me deeply, but for some reason I had not pursued his other works. After we discussed Baldwin’s work, we watched part of the PBS documentaryJames Baldwin: The Price of the Ticket. I had never heard Baldwin speak before, but when I did, I knew that this eloquent voice not only unabashedly spoke the truth, but demanded you listen as well.

That same voice, with its critical insight, permeates Jimmy’s Blues and Other Poems, releasing on April 1st from Beacon Press, just in time for National Poetry Month and just a few months away from what would have been Baldwin’s 90th birthday. It includes all of the nineteen poems from the original Jimmy’s Blues, published a year before his death in 1987, as well as poems from Gypsy, a limited-edition art book, of which only 325 were printed. 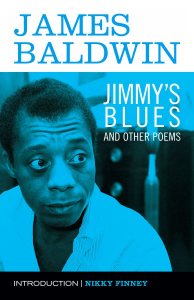 Nikky Finney, the winner of the 2011 National Book Award for Poetry, writes in her powerful introduction that “Baldwin saw himself more poet than anything else.” It’s a comment both on the importance that poetry played in Baldwin’s sense of self, as well as the lyrical power that infuses all of Baldwin’s essays, books, plays, and speeches.

I never imagined I’d be given the chance to work on one of Baldwin’s books, and when the offer came I jumped at the opportunity. As a gay man, Baldwin represents for me a certain pride and eloquence, both of which can be seen in many of his poems. In “Munich, Winter 1973 (for Y.S.),” for example, Baldwin reaffirms his commitment not only to documenting the black experience, but the gay experience as well:

In a strange house,
a strange bed
in a strange town,
a very strange me
is waiting for you

Many of Baldwin’s poems offer a certain gay sensibility, a campiness even, as in the poem “Le sporting-club de Monte Carlo (for Lena Horne),” which opens with the lines

The lady is a tramp
a camp
a lamp

But then, just as the reader is about to write off the poem as a bit of silliness, Baldwin’s essential truth—about his feelings for Lena Horne and what she did for the black community—hits you in the gut:

the lady is a wonder
daughter of the thunder
smashing cages
legislating rages
with the voices of ages
singing us through.

In his collection of essays on films, The Devil Finds Work, Baldwin describes how, as a child, he saw film actress Bette Davis on screen for the first time and could identify with her based on the similarity of their resemblance. His father had told him how ugly he was, that he had “frog eyes.” Upon seeing Davis, Baldwin is stunned to see in this icon of beauty those same “pop-eyes popping,” and it leads to a personal revelation: “I was astounded. I had caught my father, not in a lie, but in an infirmity.” It’s this same astute observation on himself and society that makes Baldwin and his poetry not just an expression of the LGBT experience, but a powerful commitment to the human condition.

Rediscovering Baldwin’s poetry has been a gift for me, and one that is going to be celebrated throughout the year because 2014 marks the launch of “The Year of James Baldwin” in New York. It will be kicked off by the New York Live Arts Live Ideas festival entitled “James Baldwin, This Time!” The festival, taking place from April 23rd through April 27th, centers on the enduring pertinence of Baldwin’s work as an essayist, novelist, playwright, social critic, and poet, and will include lectures, panels, and performances. “The Year of Baldwin” celebration will feature Baldwin-inspired programming throughout the city in partnership with theHarlem Stage, Columbia University School of the Arts, the Vera List Center at the New School, New York University, and the Harlem Book Fair.

Nikky Finney will attend the festival and participate in two of the panels, one on Jimmy’s Blues and Other Poems on Saturday, April 26th at 5:30pm and co-sponsored by the Poetry Society of America with featured readings and conversations with Edward Hirsch, Yusef Komunyakaa, Ed Pavlić, Meghan O’Rourke and Nathalie Handal. In addition, Finney will be a part of “Jimmy at High Noon,” a series of five daily readings on Saturday, April 26th at 12:00pm. For more information about the festival, visit:http://newyorklivearts.org/liveideas/

Baldwin will always remain a permanent fixture in the eyes of American culture. Now, with Jimmy’s Blues and Other Poems, I hope that Baldwin aficionados and general lovers of poetry will be able to rediscover, as I have, the work of a great artist whose insight, experience, and truth-telling still resonates today.

ABOUT THE AUTHOR
Nicholas DiSabatino is a publicity assistant at Beacon Press. He received an MA in Publishing and Writing at Emerson College and a BA in English at Kent State University. In his spare time, he tries to balance life with a violin-playing fiancé and a black cat named Roxie.