Afro-Chicano poet and playwright John Murillo has generated a great deal of excitement and praise from the likes of Junot Diaz and Yusef Komunyakaa for his premiere collection of poems, Up Jump The Boogie (Cypher Press, 2010). Currently he is the Jay C. and Ruth Halls Poetry Fellow at the Wisconsin Institute for Creative Writing and his choreo-play, Trigger, will debut in 2011 at Edgeworks Dance Theater. I sat down with this quiet storm to discuss his book and particular brand of poetry for the people.

Adisa Vera Beatty: When I read your book I definitely heard music, but also the influence of someone who was an emcee. Do you rhyme?
John Murillo: I did. I started out as an emcee 27 years ago and did that until I got to college. I kept writing rhymes and still do occasionally. Then I met up with some poets who also became my teachers and discovered how much went into crafting poems; I got hooked and turned all my attention in this direction. I think all those years of writing and listening to rap definitely affected my writing. The rappers who I’ve looked to most over the years were, above all else, witnesses. They wrote about their surroundings and the people in them. And they were poets. So yes, hip hop definitely influenced my poetry. It gave me ears and eyes.

Adisa Vera Beatty: How was it growing up in LA? Can you talk a little about that experience?
John Murillo: I’m 38 so I grew up in the ’70s, early ’80s. It was a gangsta culture you know, so there were few options. You’re in a neighborhood but not in a gang, you still gotta rep that neighborhood so you’re not gonna wear red in a Crip neighborhood and you’re not gonna wear blue in a Blood neighborhood. You read the walls, you know who wrote what and you know how to function in that. As far as the way it shaped my view on manhood, what is considered masculinity is also what I was saying—it’s a warrior culture. I’ve been thinking about this a lot lately; if you go anywhere in the world today people have their warrior culture. The Maoris in New Zealand, the Aztec, the Vikings…I don’t think we lose that. Particularly, here in America we have these kids who don’t have these rites of passages set up so they create their own, and it manifests as gang activity. So it was rough.

Adisa Vera Beatty: Did you know these poems were this collection when you were writing them? And is there a common thread or conveyance you sought to create?
John Murillo: Yes and no. I knew what I wanted my first collection to be, but the poems weren’t there yet. As far as the writing, I wanted to write poems of witness. A lot of people have shared their lives with me, and I know a lot of people who maybe left too early, and I wanted to pay homage as well as I could with this first book. So writing the book has allowed me to bring them back into my life in a certain kinda way. 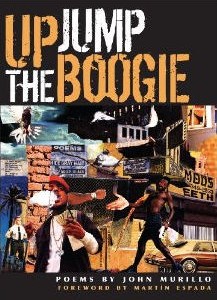 I knew it [the book] was going to speak to the so-called underclass. A lot of the writing that comes out by contemporary black poets for the most part is middle class black America. It’s “Huxtable” poetry and there are not enough “Good Times” poets. I wanted to write something that represented the other side of the black and Latino experience, so I knew I wanted to write that book. When you’re writing from a working-class perspective, and much more than Phil Levine or Larry Levis, for black and Latino people it manifests differently. There’s a class experience, but it’s also racialized in a way that it’s not for a lot of other groups. There’s this void where not enough voices are being heard from the black working class, or Latino working class. And that’s something I hope to do through my work…I don’t think anyone can fill that void, but at least I’ll be a drop in that bucket.

I do think that void can be filled. It’s not AIDS; it’s not cancer. It’s just about something that people are going to be committed to wanting, to support and bring to fruition. It’s like how many years ago—seven, nine years ago—there wasn’t any Cave Canem. And maybe that has always been a need, but it’s filling a void now. It just takes that one person being like, “I can do it and I know three people that can help me.”

And that’s one thing I admire about Willie [Perdomo] and what he’s doing with Cypher Books. It’s just what you’re saying. The poets he’s choosing for his imprint, each of them is different. There’s not this aesthetic line that they’re all following. But it’s also renegade poets in a sense. Their main audience lies outside of that norm, that mainstream. And I think he’s doing important work of setting up and giving people the chance to get their voices out there.

Adisa Vera Beatty: I agree with a lot of what you’re saying but I always feel sensitive when conversations about class in terms of “academic” poets, “street” poets or the “Huxtable” and “Good Times” poets comes up. A lot of times this battle of who is real or legitimate is something that we get caught up in, especially with all the appropriations of our culture.
John Murillo: You’ve got these dichotomies, these lines drawn between academic vs street poets. And that’s problematic because now what happens with someone like me who started off as an emcee, gets his MFA, and is now doing a fellowship teaching at a university? So am I an academic poet now? How do you draw the line? So I find that problematic limiting. I’m not trying to draw a line between MFAs and non-MFAs, for the most part those who are able to choose that route are coming from an experience, class wise, before they get their MFA. But now things are opening up, so I don’t make a distinction between academic and non-academic, spoken word and poetry proper. What I am saying is there are just recently some poets from this working-class experience, this black working-class experience who are now having their voices heard, but that wasn’t always the case.

Adisa Vera Beatty: It’s clear from your collection that music has always been in your life. Can you talk a bit about the role music had in growing you and your craft?
John Murillo: It helped teach me about life. Before I knew what a heartbreak was I could listen to some of my pop’s records, it gave me an emotional vocabulary, so when I went through my own trials and tribulations as a young man, you know I had a repertoire. My father would play his records all the time. Saturday mornings he’d wake us up at the crack of dawn playing The Temptations, Marvin Gaye, Commodores, Al Green. Sometimes he’d take out some of his albums and show us pictures from ’Nam, sometimes he’d be sitting there smoking. It was a way for him to access the silence I think we all need at some point.

I was re-reading the manuscript the other day and was struck by how much music there is in it. Even when I don’t think it’s there, it’s there playing somewhere in the background. I think this is true of most black poets. Music for most of us, I think, is the art with which we’re most consistently in contact. Few of us visit museums with any regularity, not everyone reads for pleasure. But everyone listens to music, some kind of music whether in your headphones or while driving to work. It teaches us how to feel deeply, how to be human. I learned how to touch a woman from listening to Prince, Curtis Mayfield and Isaac Hayes taught me how to walk through life.

Adisa Vera Beatty: I’m always interested in what we name/call things. What does Up Jump The Boogie mean to you?
John Murillo: There’s a passage in that song, “Aquaboogie,” by Parliament-Funkadelic, that I love. It says, “With the rhythm it takes to dance through what we got to live through, you can dance underwater and not get wet.” They’re speaking of the grace, the impossible grace that allows us to get through the struggle that life is. What we had to go through as a people takes such grace. In my poems–in this book, in particular–I want to speak to both the grace and the struggle. A lot of time what sustains us is that rhythm, that music. The title, Up Jump the Boogie, for me at least, is evocative of both.

Adisa Vera Beatty: How has NY informed you as an artist? You’ve lived more than half your life someplace else?
John Murillo: One, the writers here are so good you really have to step your game up, and I have to say the same thing about D.C.—it has many talented writers, but the stage here is much larger. And I was fortunate enough to find community here in New York of youngish writers who are serious about their craft. So it’s good to have those people around. But you asked me about New York and how it informed my art. That whole Nuyorican Movement, I guess, from its origins, a lot of that also informed my aesthetic even before I got here by way of Willie Perdomo, Miguel Pinero, Pedro Pietri. Plain English you understand, but when you do it in another language…metaphor, sound, all these things that we expect from good poetry. But it’s also very clear that it’s meant for people. It’s not meant to be difficult, it’s communication. It has a certain swagger to it that I can relate to. It’s of the people and for the people. At least that’s what I want poetry to be. I’d rather write to people and that’s what I think they did in the Nuyorican Movement and I’m attracted to that.