“In the ghetto there is a mansion, and it is my father’s house.”

So begins Mat Johnson’s latest novel, Loving Day, a story in which people, places, and ideas are often at odds. Fans of Johnson—best known for the books Pym, and Drop, and the graphic novel Incognegro—will recognize his familiar satire and wit, but this time it’s much more personal.

At the center of Loving Day is Warren Duffy, an “inept” comic book artist who returns to Philadelphia to take care of the house bequeathed to him after the death of his father. At the onset Warren is a broken man—he left behind a failed business and marriage in Wales and he’s got no money. His sad life is made worse by the fact that he has to deal with his father’s roofless, moldy, and urine-thick house, with its foundation literally crumbling beneath his feet. And, if we’re to believe Warren, it may also haunted; or inhabited by crackhead squatters, one white, the other black. 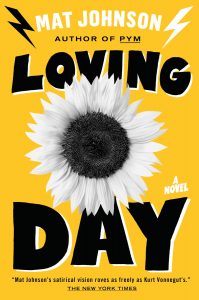 Warren, like the book’s author, is biracial; his father was Irish-American, his mother African-American and he doesn’t feel comfortable on either side. Because he’s not dark skinned—he’s lighter than most white people—passing is relatively easy for him, yet the effort of pretending and hiding a part of himself adds to his discontent. As he puts it, “I am a racial optical illusion.”

As such, Warren is always performing, always trying to prove himself and we see this act early on when he tries to earn some money at a comic book convention and is seated in the “urban” section:

“And as Caucasoidal as I am, as racially ambiguous—again, again, because it never goes away—I still talk to them about my experiences as a black man in comics and the predominantly black crowd actually listens.”

It is at this convention that Warren meets Tal, the white, Jewish teenage  daughter he never knew he had, the result of a brief sexual encounter in high school. Tal quickly moves in with him to the haunted house, and they forge a flawed but tender relationship. Warren tries to teach his daughter how to be black but his efforts are often rebuked with quips like, “I already have an identity, I didn’t think I needed to get one in a new color.”

Claiming identities is largely what Loving Day is about; Johnson himself has called the book his “coming out as a mulatto,” when he has always referred to himself as black in the past. The title refers to the day of the Supreme Court’s 1967 decision Loving v. Virginia, which declared all laws against interracial marriage as unconstitutional in the U.S.

With Tal, Warren not only learns to become a father, he learns to embrace the fact that he is a mixed-race man. He’s helped (much to his chagrin) when he enrolls Tal in the Mélange Center, a community organization and school that aims to, “help mixed children deal with the unique challenge of negotiating African and European hybridity.”

Loving Day starts out spectacularly strong, pointing a critical lens at the United States’ issues with race and identity, leaving no side out of the equation, but largely focusing on the internal struggle of individuals. The weakness of the novel, although slight, occurs toward the end when the plot feels a bit rushed as Johnson tries to tie up all of his loose ends.

Still, Loving Day as a whole is well executed and is Johnson’s most ambitious and successful to date. The best moments come when Warren tells us like it is using humor, neurosis, and endearing self-deprecation. Like Ta-Nehisi Coates’ Between the World and Me, Loving Day holds an important place in our current conversation about race and identity. What shines through Johnson’s writing is the longing to be rid of such constraints, perhaps best summed up by Warren as he admires a fellow biracial romantic interest: “She is real. She is certain. And look at her: she is free. How the hell do you get free?”

In the beginning of the novel, Warren believes that getting rid of his father’s house, along with the ghosts that live there, is the key to his freedom. But by the end, his view on the crumbling mansion and what Tal and her friends refer to as the “first couple” has greatly changed: “I see what they are, or what they were. Just lovers. Just people.” He keeps the house and gains a new look on life, one that isn’t tied up in feeling other. Warren realizes he isn’t black, white, or mulatto; he’s a father, artist, and human.

Dana De Greff is a writer and is currently earning her MFA in fiction from the University of Miami. Follow her on Twitter @DanaDeGreff.