Labor Day in Brooklyn is synonymous with the West Indian American Day Parade, an annual event preceded by months of preparation and festivity. Several years ago, I hosted a Labor Day brunch that showcased some fine Caribbean culinary fare –much to the delight of my family and friends. Since then I’ve added a literary dimension. Every year, I invite a literary artist of Caribbean heritage to my home to read from recently published work. In 2014, Dr. Elizabeth Nunez read from her memoir, Not For Everyday Use. This year, I was honored to have Ms. Naomi Jackson read from her debut novel, The Star Side of Bird Hill.

Of the book, Tiphanie Yanique, author of Land of Love and Drowning, writes, “Naomi Jackson has written a tender novel exploring the complexities of motherhood and childhood. The Star Side of Bird Hill holds together opposing elements—the book is quiet in the telling, but the story being told is sharp and virbrant.”

In anticipation of her reading, Ms. Jackson agreed to answer a few questions about the novel and her writing process. 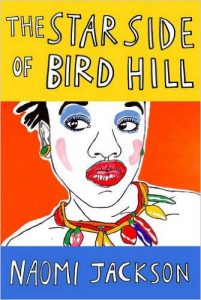 Arlene M. Roberts:  I’ve read your book twice over two consecutive weekends, with absolute delight. The more familiar narrative is that of an immigrant’s quest or journey, navigating the terrain in America.  You’ve opted not only to reverse the direction, but also to shift the focus to a younger generation, as you explore identity and belonging through the eyes of two sisters, Dionne and Phaedra.  What influenced your decision?
Naomi Jackson: It’s moving to hear that you chose to spend so much time with my book, and with these characters. When I started writing the book, I didn’t intend to tell a specific kind of story; I was simply working with the characters as they appeared – four kids, two American, two Bajan – getting into trouble in a church yard in rural Barbados. Over time, as I continued to work on it, I began to see the value of a novel that reflected the experiences of myself, my family and my friends, of having lived in America but nursing a strong connection to home.

AMR: Stylistically, I appreciate the manner in which the mother’s illness, initially unnamed and addressed indirectly, hovers over various family members, yet propels the pace of the novel.  Why do you focus on mental illness?
NJ: I chose not to address the question of Avril’s diagnosis head on for a few reasons. I wanted to squarely focus the book on how Avril’s illness affected her family members. Because I choose to write Star Side in a shifting point of view, having some haziness about the specifics of Avril’s diagnosis allowed me not to confuse the reader by pulling them in yet another direction. It was also important to me that readers got to know Avril before drawing conclusions about her. I wanted people to see her flaws as well as her strength, and to allow her a level of nuance, dignity, and compassion that’s not always a given for people who have these struggles.

I think that a conversation about mental illness, and more specifically, about how mental illness affects not just the person who’s sick, but an entire family, is an important one that needs to happen not just in Caribbean communities but also in our society as a whole. I’ve had a diverse group of readers – African-Americans, white folks, children of Caribbean, Latino, and African immigrants – tell me that the book resonated with their experiences being raised by mentally ill parents. I’m glad that this is the case; there’s so much solace in knowing that you’re not alone.

AMR: One of the recurring themes is that of status – ‘insider’ vs. ‘outsider’ – whatever the parameters for membership.  Discuss.
NJ: The theme of belonging recurs throughout the book – the desire for it, and its elusiveness. All of the major characters in the book are struggling in some way with their yearning for community, for belongingness; they are either trying to work through their rejection by others or recover from it. Even Hyacinth, who’s 63, feels like an outsider; she’s in service to so many people on Bird Hill, but feels that she is very different from most of them. Phaedra, who’s ten, imagines that she’ll make friends in Barbados easier than she did in Brooklyn, but that’s not the case. She does find love and friendship in Barbados eventually, but this is hard-won. With Phaedra, I was interested in exploring the naïveté of expecting immediate kinship based solely on a shared country of origin.

AMR: Grandma Hyacinth is a woman way ahead of her time, part keeper of the old guard and values, part activist advocating for reform and challenging the system.  In spite of her humble upbringing, Grandma Hyacinth envisions and harbors high aspirations for her daughter and granddaughters, rooted in a solid educational foundation.  Who inspired this character?
NJ: Hyacinth is a composite of my grandmothers, mothers, and father, all of whom had a hand in raising me. My family is a mashup of the old school West Indian way (manners, thriftiness, organized religion, etc.) and a contemporary willingness to adapt for the sake of the next generation’s success and happiness. My grandmother only had a fourth-grade education, but she made sure that each of her boys graduated high school and had steady work afterwards; many of her grandchildren have gone on to college and graduate school, which makes her very proud. I’ve inherited an odd mix of commitment to both tradition and to social change. As I think more about it, though, I realize that this combination isn’t that new or strange. Many of these values – education, a focus on community and family, social justice – are commonly held in black communities in both America and in the Caribbean.

AMR: You cover the spectrum of skin tone and hair texture, from ‘light skin and long hair’ to ‘deep ochre’ and ‘shade of chestnut with close cropped hair.’  Let’s talk colorism in the Caribbean, shall we?
NJ: After I finished the book, I briefly waded into a heated discussion on social media about colorism and whether writing about skin tone and hair color was an indication that the writer themselves was guilty of being color struck. I can see why there is such strong feeling about this – to this day, color, hair, and appearance determine so many of the opportunities that are available to people (relationships, housing, jobs). That said, I thought it was important to show how Caribbean people teach their children to value whiteness – Hyacinth tells the girls at one point that she doesn’t want any black-black pickney running around. I also wanted to illustrate the ways that girls in particular privilege white features, admiring and putting on a pedestal other girls who are considered pretty by virtue of their skin, eyes, hair, etc. I heard so many painful stories from women in my family – particularly women in my mothers’ generation – about being teased and put down because of having dark skin, and I was so troubled and saddened by their stories. Because these unconscious behaviours are so deeply ingrained in our psyches, I wanted to draw attention to them. I don’t think that we can change anything that we’re not able to name and look at critically first.

AMR: The temporal references/setting places the mom, Avril, as my contemporary/peer.  The younger daughter, Phaedra, at 10 years of age, is just two years older than my niece who, in recent years spends her summer with Granny and Grandpa in Trinidad and Tobago.  Your novel makes for interesting intergenerational discussion.  Is this who you envision as your audience?
NJ: I never thought about an audience other than myself when I was writing the book. The fact that this book has readers now is no small miracle to me. Now that it’s out in the world, I’m very excited that, because the story has multiple points of entry for people at different life stages, it is quite accessible. I have been excited to have folks buy the book for their moms, daughters and nieces; I’ve signed quite a few copies of the book for mother/daughter pairs.

AMR: The duality of existence – traditional beliefs infusing practices of organized religion – and role of the church as not just a place of worship, but a venue for social gatherings and interaction is apparent.  How common is this?
NJ: I can’t speak to the commonality of blending traditional beliefs with organized religion in the time period when the book is set (1989). That said, I tried to draw a complex character in Hyacinth, someone who’s equally devoted to her religion as her reason, and to see her legacy live on in Phaedra, who’s both profoundly rational and very much interested in magic and God.

AMR: Typically, any mention of Carnival in the Caribbean and the conversation centers on revelry and festivity.  However, you’ve chosen to delve into the less glamourous aspects, like human trafficking.  Why?
NJ: Tiphanie Yanique’s story in How to Escape from a Leper Colony, “Kill the Rabbits” influenced my writing about Crop Over in The Star Side of Bird Hill. I haven’t read that story in some time, but it was my favourite one in the collection because of the way that it went well below the superficial level of revelry, dancing, and eros we typically associate with Carnival, to expose more difficult layers beneath. I’m reminded here too of the classic Brazilian film, Black Orpheus, and how the characters’ lives turn on a dime during Carnival in that movie. So I was inspired by these two examples of gritty writing about carnival. I also wanted to use Crop Over as an occasion to meditate on the ongoing legacy of slavery in Barbados, one that I believe manifests in the contemporary exploitation of young women.

AMR: When you embarked on your literary trajectory, which authors shaped your consciousness?
NJ: I started out writing poetry, and some of my favourite poets growing up included Sonia Sanchez, Audre Lorde, and Langston Hughes. I liked reading books that featured girls of color as protagonists. Some of the books that I read at the beginning of my journey as a writer are still with me today. These texts include Jamaica Kincaid’s classic Annie John, Paule Marshall’s Brown Girl Brownstones, June Jordan’s Soldier: A Poet’s Childhood, as well as many of Jacqueline Woodson’s young adult books. As I write more essays these days, I look to James Baldwin, Toni Cade Bambara, Ta-Nehisi Coates, and Roxane Gay for inspiration.

AMR: Is there anything else you would like to add?
NJ: I’ve read lots of great interviews in this magazine, and I was fortunate enough to interview Chimamanda Ngozi Adichie for Mosaic many moons ago; it’s a real honour to be interviewed by you now.

Arlene M. Roberts, an attorney turned policy analyst, is the author of an independent study The Faces of Detention and Deportation: A Report on the Forced Repatriation of Immigrants from the English-Speaking Caribbean, the first and only in-depth study on the topic. Her report has been highlighted in the New York Daily News, Trinidad Guardian, Trinidad Newsday and by the Migration Policy Institute; she has been interviewed by the British Broadcasting Corporation and reviewed in law blogs.