Ten years ago when Zadie Smith wrote her first novel White Teeth, she proved that she was a gifted writer. Three novels later, Smith has maintained her brilliance and has returned to form with a novel that is as exciting and impressive as her first effort. NW is a novel about fear, deception, and reconciling with the choices we make in our professional and personal lives. Similar to previous works, NW introduces readers to angst ridden, awkward characters who struggle with their identity and their place in the world. The novel also features many familiar themes found in Smith’s work, such as the immigrant experience, cultural hybridity, infidelity, and class disparity. 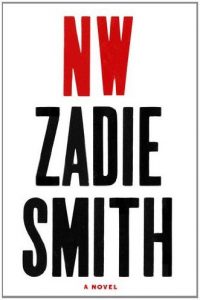 Like White Teeth, NW is situated in Smith’s hometown of Willesden, NW London. In comparison to White Teeth though, Willesden in the new millennium is less quaint. In NW, Willesden is a gritty, unsafe place rife with drugs and crime. In a moment of nostalgia, Smith gives us a glimpse into the glory days of old, describing a church dating back to 1315 situated in the middle of a roundabout: “Out of time, out of place. A force field of serenity surrounds it.” Quickly jogging us out of this romantic reverie of the past, she reminds us that while the church remains the same the parishioners are different.  The pews once filled with Anglo- Saxon worshippers have been replaced with a Polish, Caribbean, and South Asian congregation.

Avid readers of Smith’s novels will have grown accustomed to protagonists who are usually white and male (Archie Jones in White Teeth, Alex Li Tandem in The Autograph Man, and Howard Belsey in On Beauty). Surprisingly, in NW the narrative perspective is given primarily to two female characters: Leah Hanwell and Natalie Blake.

Life-long friends Leah and Natalie are born in the same government housing estate. Both are granted the same opportunities for their lives. Although Leah is white and lower-middle class and Natalie is black and working class, race and class differences do not favor Leah, in fact it is Natalie who advances into middle-class life. Leah chooses to lead a simple life working for a small government agency that allocates funds for families in need. After college she puts aside her wild life of drugs and casual sex, political activism and high-brow friends for a quiet life with her dog, Olive, and her exotic French Algerian hairdresser-turned-husband, Michel. Michel, a true believer of the idea that in England everyone has the chance to improve their station in life, is desperate to move out of their government apartment into a place of their own. Leah is too afraid of the unknown and refuses to move out of her childhood neighborhood.

Natalie, who changed her name from Keisha to Natalie (possibly because it sounds less ‘black’), is a successful lawyer. Natalie lives in a luxurious home on the right side of the tracks. She is married to her college sweet heart, Frank, a wealthy, handsome banker of Italian/Trinidadian heritage. Natalie and Frank are the parents of two beautiful children. On the surface both women seem to have it all, but as the story unfolds it’s clear that despite their achievements they find life rote and unfulfilling. Leah feels like her life is meaningless. She never put her philosophy degree to good use and she hates her job, but has no clear goal of what to do with her future. While she loves and adores Michel, she feels a strain on the relationship and she’s is terrified of bearing his children.  Even her mother’s constant nagging about grandchildren can not persuade Leah to become a mother. Leah’s relationship with Natalie is one of the most meaningful relationships in her life, but as the years pass this friendship is compromised by Leah’s envy of Natalie’s success and her disgust with Natalie’s superficial nature.

In comparison to Leah, Natalie has orchestrated every facet of her life. She fought hard to gain respect as a top lawyer. Despite her high-powered job and her seemingly perfect family, Natalie is insecure and shallow, and constantly feels as if she has something to prove to the world. Natalie notices her relationship with Leah is fragile, but consumed by the problems in her own life she risks breaking up the friendship.  In an effort to gain control over their lives, both women turn to deceptive means to cover up their sense of fear and failure and risk losing everything and everybody who is important.

At times one can easily become impatient with Leah and Natalie who are portrayed as whiny, self absorbed, and ungrateful women. Fortunately, Smith drives home a larger point that doesn’t allow this novel to rest on self-indulgence. Against the backdrop of the women’s lives is another narrative about pressing social issues such as the endless cycle of poverty, illiteracy, absent fathers, the drug plague, and the failure of the criminal justice system.  Although they were granted the same opportunities, many of Leah and Natalie’s friends and family members are caught up in a lifestyle of crime and reckless behavior. Characters like Felix, for example, is a reformed street criminal who wants a fresh start in life but can’t escape the harshness of the streets. Cheryl, Natalie’s sister, continues having children out of wedlock and is therefore forced to live at home with her mother. And finally, heroin addict Nathan Bogle chooses a life on the streets as a pimp and a hustler. These characters are all accountable for the decisions they make in their lives, however as Smith shows us we can’t discount the fact that for some growing up in a certain environment jeopardizes one’s future.  As the character Felix says, “[I]n the end, you just got to be the best you that you can be. The rest will follow naturally.”

Despite a tragic conclusion to the story, the novel is rife with humor and irony.   Smith also draws on her signature style of including a healthy dose of pop cultural references and a lively array of authentic dialects. Devoted fans of Smith’s work will also be thrilled by intertextual references to her other stories like Hanwell in Hell and Martha Martha—a couple of characters from White Teeth also make a brief appearance in the novel.

NW showcases Smith’s creativity and masterful storytelling that’s evident in all her novels. Like White Teeth, the novel draws on realism to offer an authentic view of contemporary life in London. NW’s fragmented plot line and moments of stream of consciousness bring to mind the experimental style of the Autograph Man. And similar to what she achieves with On Beauty, Smith manages to handle complex issues with an air of simplicity.

Tracey L. Walters is Associate Professor of Literature in the Department of Africana Studies at Stony Brook University where she also holds an affiliate appointment with the Department of English and Comparative Literature. Dr. Walters works in the areas of Pan African Literature, African American Women’s Literature, and Black British literature. She has published a number of articles on the subject of African Diasporic Women’s literature and two books: African American Women and the Classicists Tradition: Black Women Writers from Wheatley to Morrison (Palgrave 2007) and edited the collection Zadie Smith: Critical Essays (Peter Lang 2008). Walters is currently working on a multimedia project on Caribbean nannies in New York.