“…YOU CAN NO MORE SEPARATE COOL FROM BLACKNESS THAN YOU CAN SEPARATE HULA FROM HAWAIIANS, OR YOGA FROM INDIANS, OR FRENCH CUISINE FROM THE FRENCH.” 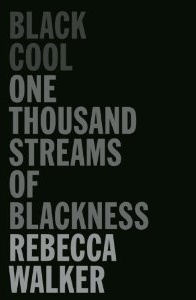 Rebecca Walker is cool. The origins of her cool aren’t located in some unquantifiable “swag,” nor is it strutting down a Fashion Week runway, cooing in a music video, or residing in a pulpit oratory whose cadence conjures protests of Southern trees bearing strange fruits. It isn’t even found in her casual Soho clothes or Noxema-clear complexion. Rebecca Walker’s cool stems from a mind, talent, experiences bred on both coasts (New York City and San Francisco, to be exact), and a pedigree of accomplishments that puts to shame many a slacker son and daughter of the 1%. Through her latest edited collection, Black Cool: A Thousand Streams of Blackness, one would say that Walker cites the ground-spring of her cool in a residence both less and more obvious, depending on your embrace of stereotype and level of social consciousness—her Blackness.

Click here to view pictures from a conversation between Rebecca Walker and Michaela Angela Davis held at the Schomburg Center for Research into Black Culture.