It easily enough can be read as a parable. Abulu, a wild homeless man makes a grim forecast of death pitting brother against brother. He could represent the white man in colonial Nigeria. The one who has divided and plundered, who has drawn colonial war lines across African nations. Abulu easily could be the Belgian who split Rwanda into Hutus and Tutsis, the Brit who sliced Sudan into northern and southern provinces.

But what if The Fishermen were not a parable? What if it were just a story? 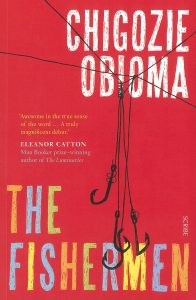 Much hullabaloo surrounds Chigozie Obioma’s arresting debut novel. This latest contribution to the African lit renaissance became only the second work by an African writer under thirty five years old to be shortlisted for the Booker Prize. Yet, unlike books like Noviolet Bulawayo’s We Need New Names and Uwem Akpan, Say You’re One of Them, The Fishermen doesn’t seem to hold overt political motives. In a market where readers crave fiction that confronts wildly shifting tectonic plates of social unrest, the novel is neither a cautionary tale about totalitarian rule nor a horror about the self-destructive nature of non-western communities. Its message is only faintly allegorical.

The Fishermen opens up with the introduction of four brothers: the irrational oldest Ikenna, the confrontational Boja, Obembe the avenger, and nine year old Benjamin who also serves as the novel’s protagonist. They hail from Nsukka the same university town made famous by Chimamanda Ngozi Adichie’s Half of a Yellow Sun. For the most part, they are normal boys who play Mortal Kombat and idolize soccer star J.J. Ukocha, who pledge allegiance to Nigerian presidential candidate MKO Abiola. However, their idyllic existence comes to a crashing halt when the boys venture to a nearby river with idle dreams of being anglers readying themselves for the big catch. It’s here the boys meet Abulu, the village madman whose “pubic region was covered with a dense foliage of hair in the midst of which his veiny penis hung limply like trouser rope”. Abulu prophesies that Ikenna will be killed by one of his brothers. The declaration is cold and final, like something spooned out of a witch’s cauldron.

Whether the boys are driven mad by fate or free will from that point on begs debate, but what is clear is the wild spiral in which the decree has sent their lives. Ikenna becomes consumed by this oracle menace, opting to shut himself off from the world. When he gets aggressive towards Boja, we cringe; the fulfillment of fate seems painfully obvious to everyone but him. The brothers huddle to comfort him, but herein we see the futility of human intervention in preordained matters. The more Ben and his brothers urge Ikenna to make amends with Boja , the more they push him to murder and the more their father’s dreams of his children venturing into the “oceans of this life and becom[ing] successful: doctors, pilots, professors, lawyers” crumble around everyone. It is this susceptibility to hubris and divine will that gives this the story its raison d’etre.

Concertedly fabulistic, The Fishermen employs many of the same magical realist tropes–the mythical village, the madman, the proverbial warnings, the dream, the forbidden water–that characterize his famed predecessor, Things Fall Apart. Yet, the novel avoids wagging its finger at any particular political event. The characters are people first. They may ultimately be pawns weighed down by societal gravity, but at best, this is the book’s secondary concern.

Sidik Fofana received an MFA in Creative Writing from NYU. He teaches in Brooklyn.