“He’s demanding to know how it is that in this day and age a black man can violate the hallowed principles of the Thirteenth Amendment by owning a slave.”

So reads the prologue of The Sellout, Paul Beatty’s romp of a third novel: a biting, satirical, sacrilegious tour de force that swipes at the taboo cobwebs of race and class in America. Its made-up world holds a funhouse mirror up to our real world, revealing the inanity of the way things are. The first chapter belongs in the storied halls that boast the shrines of Eddie Murphy, In Living Color, Dick Gregory, and other sultans of Black comedy that have, over the years, replaced tears of pain with guffaws of pain. 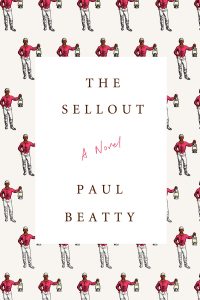 At the forefront is an unnamed narrator (he goes by several nicknames including “Bonbon” and his last name “Me”) campaigning to restore his hometown of Dickens, a pastoral hood in California that has inexplicably vanished from all official maps. It’s an area so run down by unemployment, violence, and poverty that even Chernobyl has refused to associate itself with it. Along for the ride is his on again-off again sweetheart Marpessa and the voluntary slave in question, Hominy Jenkins, who claims fame as the lost original cast member of The Little Rascals.

Beatty’s narrator is no stranger to the call of heroic duty. His deranged psychologist father belonged to the Dum Dum Intellectuals, an off-the-books cabal of thinkers who discuss local politics at a donut shop. A self-proclaimed “nigger whisperer”  with the uncanny ability to talk his fellow brothers and sisters off the ledge, he comically dies at the hands of the LAPD, leaving our protagonist with the herculean task of saving the soul of a zip code already damned.

Our lion heart’s first order of business: bringing back reserved seating for Whites on the Dickens city bus. Why? Because discrimination brings oppressed people together he assures. And it mostly works–besides the civil backlash and media outrage of course.  “People grouse at first, but the racism takes them back,” one of the city bus passengers concedes. “Makes them realize how far we’ve come and, more important, how far we have to go.”

The rationale is profound in its absurdity. In the wrong hands it sounds like the misinformed views of a delusional reactionary, but only Beatty can entertain us with the risible irony of it all. Just as discrimination can have positive side effects in Beatty’s world, so too can the brazen act of owning another human being happen so passively.  When it comes to slaveholding, the narrator does not pursue his “property”; he merely relents to it the same way a yuppie indirectly uproots a native resident in the search for a city apartment. Even when he uses the novel to riff on cultural politics, Beatty handles the touchiest subjects with the lightest of strokes. He pokes, tickles, and flapjacks Black myths. He masterfully juggles the proper and the profane, the slang and the Latin, the plot and the punch line.

Sometimes it takes a city like Dickens to understand a city like Ferguson, Missouri. Sometimes we need a fictional Hominy to properly mourn our real life Buckwheat. Sometimes we need to see how owning a slave and keeping a black nanny may not be as far off as we think. The Sellout picks the most hilariously original ways to tell us what we already know: that we are still in conversation with the peculiar institutions of yesteryear. It also trolleys on with subtext that cautions us to beware what one may mistake for progress.  It all seems perfectly diagnosable in a place that doesn’t exist. The trick is that in scrutinizing Beatty’s parallel universe we are given permission to scrutinize our own.

Sidik Fofana has written several publication including the Source, Vibe, and allhiphop.com. His work appears in The Black Male Handbook: Blueprint for Life edited by Kevin Powell.