Detailed in its sense of dual landscapes—starting with Moscow’s intricate maze of metro tunnels and the holes of a deceased, 12-year old boy—Hamid Ismailov’s The Underground is narrated from the grave of Mbobo. He’s the son of an African athlete who came to Russia during the 1980 Moscow Olympics and a Siberian woman, also named Moscow, who’s described as having distinct Asiatic features. Mbobo speaks from his burial site, recounting his trials and tribulations while making his way through the arterial lifeline—the underground metro system—of the Russian capital. 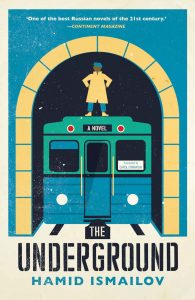 Mbobo’s flashback of his brief time on earth, spent primarily in a Moscow seething with prejudices toward a boy of African-descent, is met with a slew of other challenges. The main advance, no longer lurking in the horizon but sweeping the nation by storm, is the fall of the Soviet Union and how that cataclysmic event plays out in real terms in his life. Sectioned in mini-chapters titled Komsomolskaya Station, Pushkinskaya Station, and other names given to Moscow’s metro stations, Ismailov places the reader in the fast-paced, historic metropolis as it dawns upon our young protagonist.

Raised by a single-mom, and two topsy-turvy lovers, Gleb and Nazar, Mbobo’s left to his inexperience to deal with his surrounding environment: repeated racial slurs; child abuse; humiliation; awkwardly observing his mother and others engaged in sexual acts; a society in rapid metamorphosis; and, in general, facing a hostile world of adults who suffer from amnesia from what it meant to be a child. This is the treacherous plotline of The Underground, guiding us to uncharted terrain through Mbobo’s virgin eyes and thoughts. His inability to comprehend his surroundings fused with a plethora of new experiences gives us a dry sense of what it must have been like for many Russians when the Soviet Union collapsed and they were confronted by an onslaught of new, capitalist intrigues.

Ismailov uses wry, comedy-relief to move the story forward and reconcile Mbobo’s misunderstandings and internal conflicts. In one scene he’s told a joke by a neighbor who’s a year older than he. The punch-line ends when a boy who had misbehaved toward a girl named Tute says: “Prosti [forgive me], Tute!” Mbobo didn’t understand the joke. However, he really liked the word because of the way it sounded. Now, constantly repeating Prosti-Tute, even when he gets home, attracts the attention of his mother. Overhearing her son mumbling Prosti-Tute, she demands that he speaks the word out loud. Mbobo says:

Not suspecting anything, I fulfilled Mommy’s wish and said loudly: “Prosti-Tute!” and before I could finish the phrase, let alone tell the whole story about that poor girl, Mommy took a full swing at me and slapped me in the face, not once but twice, saying as she did so: “I’ll show you a prostitute! I’ll tear your little tongue out!”

The repeated use of comedy relief poses readers with a challenge, if not a conscious choice to make: Will the urge to subscribe to entertainment for entertainment’s sake detract from contemplation about Mbobo’s dire situation? How does the author’s use of comedy, narrated through the voice of a deceased black boy who’d been routinely abused in life, informs or, possibly, misinforms readers about not only those painful experiences but also the emanating internal conflicts of the protagonist?

The Underground was a delight with its intense sociopolitical overtures mixed with humor. It begs the reader to not relinquish Mbobo to walls of adversities in his path. His journey is a microcosm of the erratic dismantling of the Soviet Union, released into a new world of uncertainty where parasites emerge and take advantage of the unfit and naïve. Despite all of its humor this story is a tragedy. Not even the cathartic release of Mbobo’s untimely demise, speaking clearer in death as he had in life, fostered redemption or made his purpose any more relevant. Though it speaks directly to the collapse of the Soviet Union, The Underground proves to be a reflection of the callous social and political terms in which some western societies are now descending.