Bronx-born, Thomas Glave stepped onto the road to literary stardom in 1992, when he won a poetry fellowship from the local Arts Council.  Yet, after the publication of two critically successful story collections, a book of essays, and a groundbreaking anthology, the Binghamton University professor says he is “just someone who writes.”  His modesty clashes with what literary observers, and the Village Voice in 2000, see—a slender, soft-spoken educator as a “Writer on the Verge,” and winner of some of the highest distinctions for U.S. writers and scholars.  As he ends a term in August as The Martin Luther King, Jr. Visiting Professor in Writing and Humanistic Studies at the Massachusetts Institute of Technology, the former Fulbright Scholar, O. Henry fiction prizewinner, and recipient of several National Endowment for the Arts fellowships travels while being immersed in an as-yet, unnamed essay collection and a novel, The Trials of Taren J. 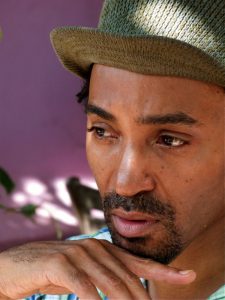 His first short story collection, Whose Son?: And Other Stories (2000), his 2005 book of essays entitled Words to Our Now: Imagination and Dissent, the standout, Our Caribbean: A Gathering of Lesbian and Gay Writing from the Antilles (2008), as well as a second story collection, The Torturer’s Wife (2008), display the author’s passion for rich language, his love for Jamaica (an ancestral homeland), and human rights.  The scholar, author, and co-founder of the Jamaica Forum for Lesbians, All-Sexuals, and Gays, had recently returned from the island when he spoke with Vincent F.A. Golphin for Mosaic.  “The most important thing is just to write, not necessarily how I see myself,” Glave said.  “That’s not going to do me any good with the next sentence.”

GOLPHIN: The comment reminds me of something I heard Egyptian author, psychiatrist, and human rights activist Nawal El Saadawi say about a writer’s power to change the world at the PEN International Literary Festival last March.  Have you ever been struck by the power of the written word?

GLAVE: Absolutely, in terms of what I have read in other people’s writing, and the power of storytelling in general.  The fact that human beings are always so captivated by stories.  I am very widely read, widely influenced.  I have taken in a lot of information from a lot of people over the years that I have been writing…My parents were immigrants to the United States.  Just by virtue of that experience, I had an outsider experience, to a degree, in the United States, being attached to a culture that was not of the United States, but connected in other ways geopolitically to the U.S.  Well of course, the way that people in my family spoke was very different from the way the other black people we soon came to know spoke, and the way the Latino people spoke, and so on.  Just that early exposure to different rhythms in language and different expressions and cultural norms and such, I think, made for a marker of difference—to actually be able to notice that people had different ways of telling stories and speaking.

GOLPHIN: When do you first remember that you marveled at the beauty in those voices?

GLAVE: Very early.  Not a specific moment, but I do remember coming of age as a teenager in school, being in school, and suddenly becoming more aware—especially, since I was spending more time in Jamaica as a child—that there were very noticeable differences in how the people in my home, in my family, spoke and used language versus the way other people did.  Plus, when I was younger I also had storybooks and records at that time, things that were British, like Alice in Wonderland, Through the Looking Glass, and Winnie the Pooh, that were English, British.

I think part of that was probably tied to the fact that we came from British colonial society.  Also, my parents were more comfortable with that kind of material.  England was more familiar to them in that way.  I heard other accents in that kind of storytelling, and so I was aware of that early on, as well.  I think that all of this is very deliberate, though.  When I was younger, I couldn’t influence what people were giving me to read and to think about, but as I got older, I became very aware that I wanted to expand my knowledge as to what was out there vis-a-vis writing.  I thought that would be very important for me to know that, and also very important for my work…I don’t want to live in a kind of bubble or an enclave in which I only am exposed to the stuff that is around me.  I think what is around me is extremely important, but I want more than that.  I want to know more about the world.  That is how my imagination and my particular curiosity works.  I am always very interested in the ways that other people do things, as well.  It teaches me a lot about myself, in terms of what I don’t do, but also how I choose to do things, in all kinds of ways.

GLAVE: The way that I think in terms of my openness to other kinds of cultures, what one learns from different cultures and ways of being.  There are narratives that go back thousands and thousands and thousands of years from eastern nations like China and Japan, and visual and written narratives from what is now Pakistan, India, that people just don’t even know about in the west.  This is also true for most non-western nations.

GOLPHIN: Much of what you’ve just said comes through in your writing, particularly in the latest book, The Torturer’s Wife, a collection of short stories that are almost without place.  There are no specific national references in most of the tales.  There are sort of oblique references to the nationalities of the characters.  The locales are left to the reader’s imagination.  How did you decide on such an approach to writing?

GLAVE: I have been working toward the work in this book in earlier works, although I did not necessarily know that at the time…I was very interested in looking at things that happen in the world, because I think of myself as a citizen of the world.  I’ve been in places where all kinds of things, such as those described in the book, have actually happened…at the core of a lot of this is really just history.  The very idea of The Torturer’s Wife itself is something that is central to any society.  There are things in Words to Our Now, my book of essays, that definitely prefigure what is here.

GLAVE: That is a very interesting question, but it is a hard one to answer in respect to fiction, because I have to be very careful when I write fiction—this is very important to me—to not let my personal politics take over the narrative and the intricacies of the lives of the characters.  Whatever my personal beliefs might be, I don’t want them to get in the way of what the characters actually have to do, who they are, and what they feel about things.

GOLPHIN: How do you manage to not let that happen?

GLAVE: By maintaining an interest in the characters, and really focusing on them, and not on my own politics.  That was the difference between Words to Our Now, writing a book of essays and writing a book of fiction.  I found myself as a fiction writer, when I came to write Words to Our Now, having to say things like, “I believe this,” or, “I feel that,” or, “It is evident to me,” in a way that I would never have done in fiction.  In fiction, I was more interested in what the characters thought and how they made their way through all kinds of problems.  That is one difference.  I was working as a fiction writer, and not as an essayist.

GOLPHIN:  “The Torturer’s Wife” is one of two or three tales in the new book that do not deal specifically with the subject of homosexuality; yet consider some of the other stories, like “Between,” the first one in the book—can you say that drama about two gay men has no hint of you?  Don’t the characters also arise from your politics or perspectives?

GLAVE: Somebody asked me a question like that about Whose Song?: And Other Stories, whether they were autobiographical…I am not sure about that…the characters in “Between” say things that I would never say.  I think there is a character in “Love Them,” a short story in Whose Song?, that says things that I would never say.  I know there is a character in the story, “Out There,” all the characters indeed, who do things and say things that I would never say or do.  This is the thing—I am more interested in getting to know those characters and seeing how they deal with situations, and what they would do.  That is one of the fascinating things I find about writing fiction, it is really different than writing essays for me, because it is such an exploration of an entirely different consciousness.  Words to Our Now was also written—I guess I can say now—in what I felt was a very necessary response to the (President George W.) Bush era.  The violence, the arrogance, the cruelty, all of the stuff that happened.  I felt it was very important for me as a U.S. citizen, as a person of conscience, to speak out about that in the best way that I could, in any way possible.  I did not feel that…I just knew that I did not want to have that era pass, and then say I had never said anything, or had stepped up, or done anything.  I wanted to be able to say that I had at least stood up and said something.

GOLPHIN: In the introduction to Our Caribbean, you state that it is a book that “makes its own contribution to an ever-increasing conversation.”  Is the collection supposed to give a voice to the Caribbean LGBT community?