Willie Perdomo engaged his audience last night at the Nuyorican Poets Café in a sensuous fiesta. Though I came inspired by his 1996 collection, Where a Nickel Costs a Dime, nothing could have prepared me for the exuberance with which the poet invoked verse. I watched, felt, listened and imagined as familiar pieces were given texture through eclectic rhythm. Perdomo artfully varied inflection and mood, insuring a mantraesque-free reading. The cherished hour was a celebration of the soul, an invitation to connect with his. 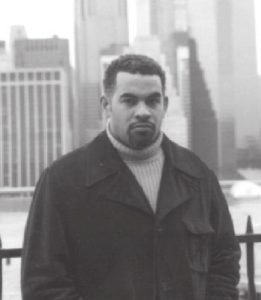 These days Perdomo prefers living in the present moment, expending his energies and talents there. “I lay it down for what comes next. I write the next poem for the book, do this interview for the magazine,” he explained. His plan for the future, is to do in the now. Although Perdomo’s Harlem inspired work has been compared to that of Langston Hughes and influenced by poets he admires such as John Cheever and Ntozake Shange, his voice remains distinctive. As early as middle school, Perdomo developed a love for literature and writing. During his college years, professors at Ithaca encouraged his talent. While majoring in English he wrote for a campus literary publication and read his poems at cultural and fraternal events. “I’ve always written about my own experiences. I don’t know any other way,” Perdomo told me.

“Reflections On The Metro North (Part One),” one of his best known poems, together with its sequel written seven years later, represent his having come full circle he told me. “The thing is change. You want to grow up,” Perdomo expressed about having overcome many personal struggles. His quest is to always progress. In his forthcoming book of poetry and prose he speaks from the same streets of El Barrio we have come to know through his eyes, however, from an entirely new perspective. When writing, Perdomo’s objective is to bring the reader to where he has been emotionally, through imagery. He believes there is power in the spoken word. “I’ve always enjoyed hearing stories aloud, even as a child,” he told me. Of his work he said, “I read them all out.”

Though unassuming and grounded -with a great sense of humor I might add- Perdomo is no lightweight. His accomplishments include appearing in two PBS documentaries, writing copy for NIKE and a screenplay for HBO. During his twenties he traveled throughout the U.S. and parts of Europe with Nuyorican Poets Live, and has been featured in such publications as The Washington Post and The Source Magazine. His work is included in several anthologies including Listen Up, published this year. Perdomo said of his achievements, “If it’s a by-product of what you do and you take it in stride that’s alright.” He prefers to experience his work as a journey and not get caught up in an image of himself. “Sometimes you can’t deal with it though,” he continued about being a poet. At times he said, he feels like he’s always expected “to hit.”

Characterizing his sensitivity, in his poem “The Making of a Harlem Love Poem,” Perdomo writes “I turn my woman’s face into a star so she can watch me walk down 125th street. She, his princess, is his North Star. On the streets of Perdomo’s Spanish Harlem, there was a fighter, a lover and a poet; he of course being the poet he explained. Perhaps though, he too was the lover; of imagination, simplicity, his Puerto Rican culture, his madre, his panas. After all, I found most distinctive about Perdomo his passion and appreciation for things often overlooked, like special moments, relationships and the power of choice. While on tour, following one of his readings he was approached by an old woman, he recounted. She took his hand, held it firmly and smiled warmly. Those moments are precious to him because, he said, “It reminds you of why it is you started in the first place.” As for where Willie Perdomo is headed next? Forward of course. As he might say, “siempre palante.” Always forward.