“This is only a preliminary warning,” is how Etienne Lero opened his 1932 “Legitime Defense Manifesto” for the publication bearing the same name. And since that declaration, black surrealism has been a clarion call for the some, while a cause for alarm for many others. 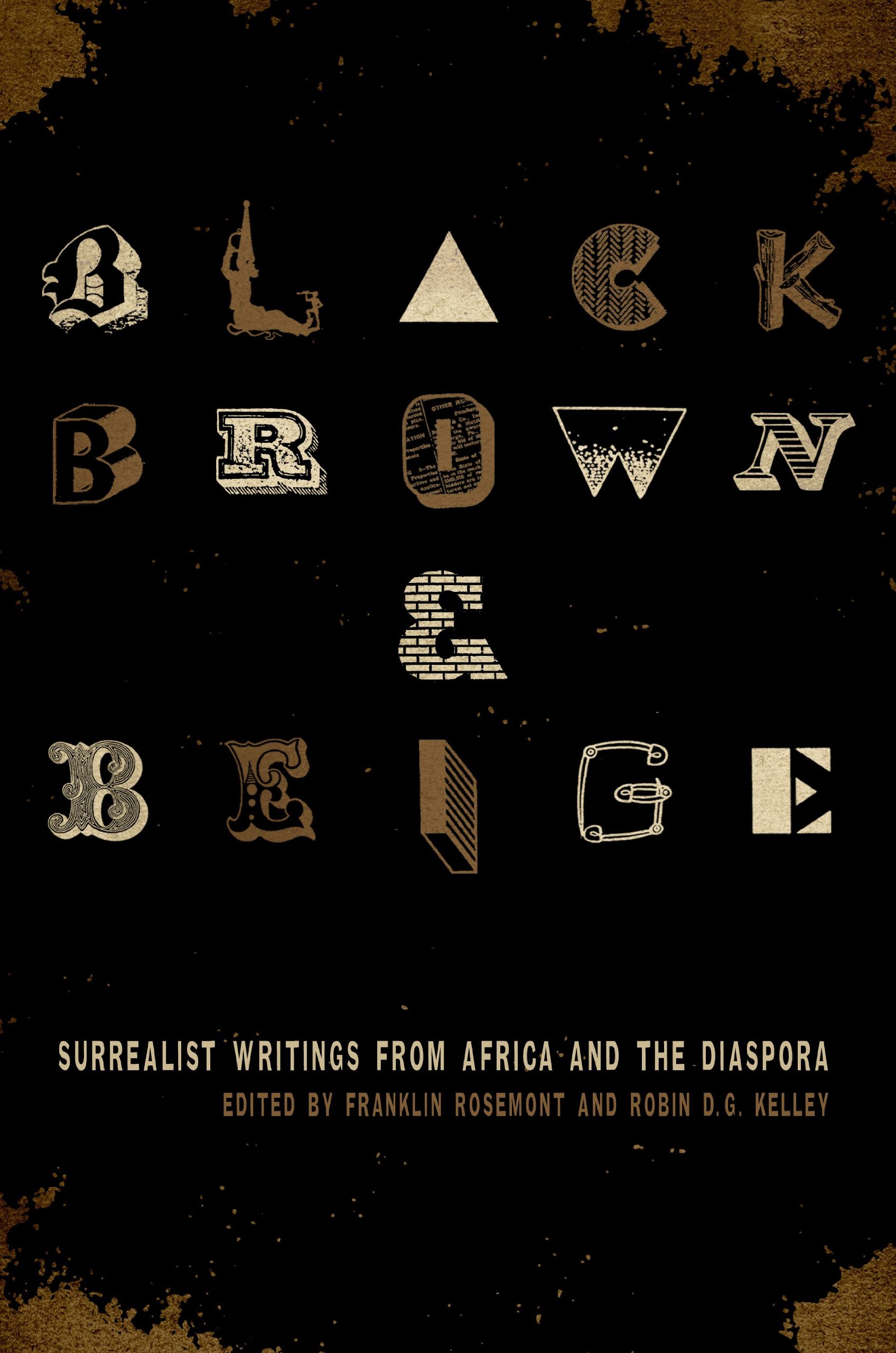 The Legitime Defense, a limited-run, red and black journal, was put together by a twenty-something Lero – then a Martinique student in Paris – and his black and brown expatriate comrades. The group of free-thinkers and radicals had all rejected the “either/or” of burgeoning Marxist politics for the “both/and” of surrealism. For them, it was about poetry and politics, social and cultural revolution; only the double-consciousness en extremis would do. Lero opined in his manifesto, “…it is only by horribly gritting our teeth that we are able to endure the abominable system of constraints and restrictions, the extermination of love and the limitation of dream, generally known by the name of western civilization.” The journal was banned in Martinique immediately.

But it is from this small group of radical artists and theorists, and the first small book they produced eighty years ago, that Franklin Rosemont and Robin D.G. Kelley use as the platform for Black, Brown and Beige: Surrealist Writings from Africa and Diaspora (University of Texas Press), the most comprehensive anthology of the afrosurreal to date.

As pointed out in Rosemont’s introduction, unlike many of the established arts movements, the French surrealists embraced their black and brown counterparts from the start, “Rejecting all forms of domination and the dichotomous ideologies that go with them,” He says, – intolerance, exploitation, bigotry, exclusiveness, white supremacy, and all race prejudice – surrealists make the resolution of contradictions a high priority.”

It has only been the art historians and academics who have expurgated and white-washed them from this marvelous lineage. Rosemont calls them “The Invisible Surrealists”, and invisibility, as a concept, is so prevalent within this anthology – and in afrosurreal practice – that it has become a tenet in the contemporary version of the movement.

What Black, Brown and Beige does, through an exhaustive compilation of poetry and prose spanning over continents, decades, and other movements; is not so much re-write a history, as reclaim it.

“Surrealism,” Rosemont says, “ – an open realism – signifies more reality and an expanded awareness of reality, including aspects and elements of the real that are ordinarily overlooked, dismissed, excluded, hidden, shunned, suppressed, ignored, forgotten or otherwise neglected.” Though the journey is far from easy – the road as fraught with as many phantoms as a Toni Morrison novel, with maps and documents buried in oblivion – the book serves as skeletal remains resurrecting themselves upon each new discovery.

Like Simone Yoyotte, the first black woman surrealist. Born in Martinique, dying in Paris at the age of twenty two, whose small, but powerful contributions to Legitime Defense, the Paris Surrealist Group, and the journal Le Surrealisme au Service de la Revolution, show glimmers of genius and surreal genesis as one of the early proponents of the automatic writing technique and expression of an unapologetic black aesthetic. Her poem “Pyjama-Speed,” written with this technique, evokes luxury, terror, and homeland in only a few esoteric lines: “My pyjamas gilt and embroidered/with myself (spear) and worst of all gilt with azure/my pyjamas balsam hammer gilt with azure…”

Beginning in Martinique (“One of the vital centers of the surrealist universe,” according to Rosemont.) with Lero and Aime Cesaire, the Invisible Surrealists move on to Jamaica with Claude McKay, to Cuba with long-forgotten provocateurs Juan Brea and Mary Low, and further still to Trinidad with C.L.R James, it becomes clear within the first fifty pages that Black surrealists have been a driving force in not only the works of Fanon and Damas, but Breton, Bataille, and Artaud as well.

Nowhere is this more evident than when Suzanne and Aime Cesaire and Rene Menil of Legitime Defense began publishing Tropiques from and about their homeland during the mass suppression of the arts in Europe during World War II.

As French surrealists like Breton exiled themselves in Martinique, Cuban surrealists Wifredo Lam, Brea and Low also converged, seeing the island as both a refuge and retreat for their art. The influence of black surrealism on the surrealist movement was so indelible that Rosemont says that “As Tropiques became more surrealist, surrealism in effect became more black.”

Though much has been written and said about artist/activist/statesmen Aime Cesaire, much more needs to written about Suzanne, a brilliant surrealist thinker, and mother of the afrosurreal aesthetic. Her quest for “The Marvelous”, more than her partner, inspired the Tropiques surrealist group, and especially Rene Menil.

“The true task of mankind consists solely in the attempt to bring the marvelous into real life,” Menil says in “Introduction to the Marvelous”, “so that life can become more encompassing. So long as the mythic imagination is not able to overcome each and every boring mediocrity, human life will amount to nothing but useless, dull experiences, just killing time, as they say.”

As the surrealist fervor ran (dripped?) into Haiti, Trinidad, Puerto Rico, Brazil, Guyana, Columbia and Egypt, luminaries brought their own local flavor to an increasingly brown and black arts movement with a greater spiritual and action-oriented base.

In Guyana, we find Leon-Gontran Damas, a contemporary of Aime Cesaire and co-editor of the famous negritude journal L’Etudiant Noir. “If I have become the man that I am,” Damas said in 1973, “I owe it to surrealism.” And the debt appears to be reciprocal. With just the small sample provided in the anthology, one can see how his cadence and content influenced the Black Power and Black Arts movements: “For sure I’ll be fed up/without even waiting/for things to ripen/ like a good camembert/So until then I’ll just go/and put my foot in it/or grab by the collar/everything I can’t stand/In capital letters:/ colonization/civilization/assimilation/and all that.”

What is particularly interesting about Black, Brown and Beige’s surrealist chronology is what happens when the movement reaches the United States, where Richard Wright can be named the first serious American Surrealist, and first black American surrealist. Rosemont notes that after Wright attended an immense exhibition called “Fantastic Art, Dada, and Surrealism” in 1937 that he “recognized surrealism as revolutionary method of learning, a means of resolving immobilizing contradictions, a way of seeing things whole and thereby changing the world.” While the mainstream American Arts and Letters community of the time (Decidedly pro-fascist, pro-capitalist and staunchly conservative.) rejected surrealism, it was the African American writers and artists who whole-heartedly embraced it, modified it, and made it their own.

The 1950s can easily be categorized as the second most anti-surrealist period in American history (This writer believes we are living in the first.), and Ted Joans in New York and Bob Kaufman in San Francisco stand as the only American surrealists of the decade and slightly beyond it. This is important because the tenor and shade of surrealist expression irrevocably changed through the inextricable linking of jazz, surrealism, and black American expression, primarily through literature and poetry. Along with the emerging Beat Movement (Of which Joans and Leroy Jones (Amiri Baraka) were initial members), black radical imagination – always an inspiration to the surrealists – came to the forefront and began to write itself into the pantheon. To Joans, surrealism was more than a way to write a poem or paint a picture, but a way of life that not only demanded “complete freedom of the imagination and radical social change, but also a far-reaching moral revolution.”

Joans’ sentiments can be placed directly alongside Kaufman’s unequivocal affirmation, “I acknowledge the demands of surrealist realization.” His 1959 Abomunist Manifesto, published by City Lights in 1959, still bears the wit and danger it held over fifty years ago. Kaufman was an activist and poet deeply involved in the struggle for worker’s rights, civil rights, free-speech, and equally against white supremacy, war, the death penalty, and nuclear weapons. Quoting David Henderson, quoting Jerry Stoll, “It was really clear that people like Ginsberg and the rest of them, when they were political activist, were following Kaufman. They didn’t lead Kaufman, he led them.”

It is also in this chapter where Rosemont acknowledges the cause for the invisibility that likely kept Joans and Kaufman out of the annals of not only surrealist history, but the history of American Arts and Letters: Jealousy.

Celebrated as “The Black Rimbaud” in France, Kaufman was overlooked for both “The San Francisco Renaissance” issue of Evergreen Review and The New American Poets anthology of 1960. Rosemont says, “Such omissions cannot be considered innocent oversights. After all, what is most important about Kaufman is the fact that he was the author of some of the most beautiful, playful, and effective poetry of the last four hundred years.”

Self-defense (Legitime Defense, in French) was the key word of the Black Power movement, and afrosurreal writers emerged at the vanguard. Ted Joans points out that Richard Wright coined the term Black Power in 1954, and with the emergence of the Black Arts founder and revolutionary genius, Larry Neal, fire-spitter Jayne Cortez, and mystic-seer, Henry Dumas (for whose work Amiri Baraka coined the term “AfroSurreal Expressionism”); the surrealist-tinged black power and black arts movements found homes all over the globe.

In 1974, San Francisco’s City Lights published the seminal City Lights Anthology: Surrealism in the United States, featuring the writings of Ed Bullins, Huey Newton, and a tribute to Bob Kaufman, marking the beginning of new interest in the old form.

The late Franklin Rosemont, co-founder (Along with his wife, Penelope) of the world-renowned Chicago Surrealist group and historian/theorist Robin D.G. Kelly show a profound sense of both surrealist scholarship and history, but more than that, they both have an understanding of surrealism and afrosurreal as points of praxis and way of life.

In the afterword, “Surrealism and the Creation of a Desirable Future,” Robin D.G. Kelley, cites The Zapatistas and Autonomista movements of Argentina, along with Hakim Bey’s Temporary Autonomous Zones as possibilities for an afrosurreal future, while all but rejecting the cold pragmatism of the modern age. “If we cannot articulate our dreams without being accused of being utopian or unrealistic,” he concludes, “then we might as well submit to the current order and open up more soup kitchens.”

This is only a preliminary warning…

D. Scot Miller is a Bay Area writer, visual artist, teacher, curator. He sits on the board of directors of nocturnes review, and is a regular contributor to The East Bay Express, San Francisco Bay Guardian, and Mosaic Magazine.