Angela Jackson’s sixth collection of poetry, It Seems Like a Mighty Long Time, covers a span of American history inclusive of the Trans-Atlantic slave trade, the Great Migration, and 21st-century Blackness. Her narrative approach is nonlinear. Jackson blurs the lines between pre-American slavery, her own experiences as a young girl and woman, and her matrilineage. She offers a jagged conception of both lines and time, challenging what readers would conventionally understand as history. The book is divided into eight sections that commence with quotes from historical Black poets from the United States and of the diaspora such as Langston Hughes and Robert Hayden, and activists such as Nancy Morejon and Ida B. Wells. This collection pays tribute to Black-American history even down to its title, which borrows from Barbara Lewis’s hit single “Hello Stranger” released in 1963. Jackson’s writings also wrestle with the meaning of Christianity in a country that has bolstered itself as “the land of the free” but which has promised little recompense to its Black citizens who were former slaves. At the center of her poems is the speaker, who begins the book as a young, rebellious girl and ends the book with concerns regarding her own mortality and her ability to see more generations of young women in her family.

Jackson’s poems are imaginative, direct, and mystical. Her narrative voice is one of specificity; she focuses on fractions of a moment instead of an entire memory which strengthens her ability sketch a scene with greater detail. The author’s opening poem “Mississippi Summer” recounts the speaker’s experience revisiting Mississippi during a stage of puberty in which she gained her period. Many of the lines of the poem bleed into each other visually as well as contextually. The poem is compact and lacks punctuation. Every line starts with a capital letter, insinuating a new idea or discovery. The poem captures the speaker’s relationship to both mother and father and addresses the lines, generationally, that allow for her elders to see her as their new hope “whether they wanted to or not.” The speaker runs wild through fields. She “walked in sandals until her feet were dirty” unlike the older women who “slept with bibles but could not read them.” The speaker describes herself as an untraditional child, more enthused by nature and running away from what would define her womanhood. The older generations want more for their own lives but during a time in which segregation was more intense and economic opportunities were scarce, they could only hope that their dreams would be lived through the speaker. Her opening poem captures the essence of the collection which can largely be viewed as a coming of age or coming of citizen book as well as a coming back to home poetry collective, whether that be the American south or West Africa, pre-American slavery.

Jackson is both an objective and illusory wordsmith. In her poem “Perfect Pears” she writes of her father:

Later, what an imperfect king prone
to temper, he whipped us into lineage
tolerating nothing he deemed outside
the rule of his kingdom.

“Whipped us into lineage” is often heard as “whipped us into line” but lineage carries a meaning associated with family history, or in this context, slavery given the recollection of whippings. Jackson is subvert and clever, making her unexpected word choices add new layers of meaning to her writing. Similarly, she experiments with language in her poem “Mama in Blue, White, and Love” in which the term Blue takes on various meanings—from the musical genre Blues to sadness, to blueprints. She also discusses White people and the white backdrop of American living by which her mother carved a future for herself. This poem is a tender ode to her mother which inscribes herself as a musical poet, deeply influenced by the Blues. In the earlier half of this poem, she writes:

Was this in your blue
print? That I be tempted by blue
devils to cry instead of laugh thunderously?
Is this the song (not blues)
you planned for me?
When did you map it out meticulously
in the midnight
house in a country of white as dead bones.

Jackson attaches racial meanings onto the colored terms but later moves toward viewing the colors in relation to objects and emotions. The terms blue and white are redefined and twisted on their heads throughout the poem:

Was I in your blue
print: a blues
note amid blue
racers weaving? Is it once in a blue
moon I kiss your blue
collar and pin your blue
ribbon in your gray-white hair?

In the latter half of the poem, white is not only a term affiliated with a race but also a term associated with the mother getting older. The entire poem reads as a labor of love the speaker has for the mother and for the sacrifices her mother made to provide the speaker with a better life. 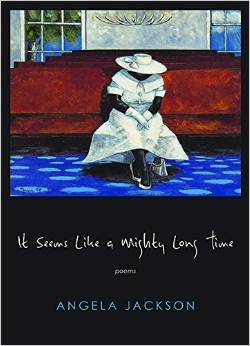 The author showcases her prowess as a story teller in her poem “My Father’s Prayers.” Her attention to detail allows the reader to see her father’s sternness to his family and his vulnerability to God. This poem showcases the submission of the mother and daughter to the speaker’s father. They go into the basement to provide light and heat to their father who plays the piano—a relationship with her father that echoes one of servility: “We lurked around his doorway like cowardly debtors observing his rich rite of passage into the working day.” In a previous poem in the collection “Perfect Pears” she describes herself and her sister as “arrogant beggars who accepted his food, his shelter, and conspired against him in whispers.” Here, there is a sharp wedge between the speaker and her father. The blood line is blurred and she perceives herself to be a strain on her father or a responsibility that boosts his own pride or ego. The father is even described as “uncharted territory” in the poem “Territory” which further emphasizes the speaker’s distance from him.

Where She Must Go: Poet Angela Jackson Reads from Her Debut Novel from Northwestern News on Vimeo.

In Jackson’s poem “Hope,” she exhibits a cryptic approach to capturing time. She imagines her cousin, who died on railroad tracks, as dreaming of an escape after his engine dies right before the crash. Her ability to base a poem on a small section of time—the time immediately before his death, highlights her finesse with description. However, this isn’t the only moment within the collection that Jackson experiments with time. In her seventh section, which begins with the epigraph “I still smell the foam of the sea they made me cross” by Nancy Morejon a Cuban poet and essayist, Jackson explores the place between freedom and slavery. In her poem “The Last Door” she describes the tip of West Africa as a goree, a door by which Africans went through and entered slavery. She dedicates this poem to the survivors of Hurricane Katrina, thus complicating the narrative. The door then becomes a move toward survival, out of the flood, into a different state of slavery in which the residents of the city are shackled by the injustices and the lack of attention given to their immediate needs.

Her poem for Phillis, presumably Phillis Wheatley, the first published African-American woman poet, recaptures the speaker’s battle with Christianity. Phillis Wheatley wrote many poems about the power of Christianity as well as submissiveness to men. Jackson questions what it means to be considered the first Black poet when the language allowed to the former slave is warped with Christian, colonial doctrines. Jackson writes “Were you the first to write whose memory they stole?” Although seemingly critical of the first Black woman poet she introduced in the collection, her poem “For Gwen, On Her Passing” pays tribute to Gwendolyn Brooks, former Poet Laureate who also hails from the south side of Chicago. It is a humble tribute. Jackson writes: “I am no match for you. And never said I was.” She views Brooks’ words like “mother’s milk” from which she continues to digest throughout her writing process.

Part II of the book opens with a Gwendolyn Brooks quote “Who is that bird reporting the storm?” Perhaps this is an appropriate entry into the second section of the book. There are many poems that capture tragedy, but the bird or the person reporting the crimes is not clear. While the first part of the book is a lucid, personal account of migration from the south to Chicago with a pointed focus on the speaker’s relationship to her mother and father, the second section is a bit more ambiguous. The various poems in this section appear to have a multitude of speakers who recount their experiences of the Great Migration.

Overall, a Mighty Long Time is an ambitious project that warps primal conceptions of lineage and time. In one of Jackson’s concluding poems “The Ritual Calendar of Yes,” she opens the poem with “Who owns the Time owns the earth.” In this collection, Jackson recreates time and owns her sense of history. The rebellious young child captured at the beginning of the book continues to rebel against constraints on her liberation even as she rewrites the voyage to slavery. This is a lengthy project which could have possibly been extended even more given the fact that some sections are comparatively shorter than others. Her poems are grouped under the umbrella of Black experiences pre and post the Trans-Atlantic Slave Trade. Some of her poems even explore the African diaspora outside of the United States. This collection certainly gives the reader much to chew on and a vision of America before red line trains took off along the tracks in Chicago. Jackson skillfully explores how African Americans have had to change their relationship to their land based on time. Within her book, she brings those different lands together and creates a new history which challenges readers to imagine what existed before their current perception of Blackness and their origins.

Ciara Miller, a native of Chicago, holds both an MFA and MA in Poetry and African American/African Diaspora Studies from Indiana University. She also received her BA in Liberal Arts from Sarah Lawrence College. She has served as the cohost and co-coordinator of Bloomington, Indiana’s poetry slam series for three consecutive years. She is the co-founder of Chicago Artists Against Gun Violence which is a collective of artists who connect youth mainly from the west and south side of Chicago to housing, job, and youth organization opportunities to improve upon their conditions. She has published poems and academic essays in such collections and periodicals as Break Beat Poets, Fjords Review, African American Review, Callaloo, Muzzle, Toegood Poetry, Alice Walker: Critical Insights, PLUCK, Chorus, and Blackberry Magazine.