How would you feel if you could recall almost everyone that crossed your life’s path? If you could remember the conversations, and the clothing, down to the shoes and accessories o f the people you’ve met. Sounds like a feat only an individual with a fantastic memory could pull off.

Or, it could be the life story of a photographer named Jamel Shabazz. Here is a man who could easily call on his “visual diary” of portraits to detail the occasions of his life. He carries his camera everywhere, even to this day. There is not a day that goes by that Jamel doesn’t add a smiling face to his cosmopolitan yet, personal, body of work. 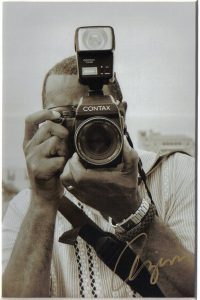 Jamel Shabazz is a photographer mostly known thus far as a documentarian of the ’80s, more specifically for early manifestations of hip-hop culture in New York City. He is self-taught without formal training from the academy. His evolution as a photographer began in the mid ’70s as a teen in Red Hook, Brooklyn.

“Prior to picking up my first camera, I was on the verge of self destruction. Two major things helped to transform my life, one was reading the autobiography of Malcolm X, [the other was] being introduced to photography.”

Jamel picked up the camera at the volatile age of 15-years-old. The teenage years are crossroads for many, a point to decide which way to follow—to walk along the path of your peers or to pave a new way. It was 1975 when Jamel took his mother’s camera and began to document his immediate surroundings.

“Growing up in Brooklyn, back in the ’70s, I saw so much flavor and rawness. Some of my first pictures were taken with a basic cheap camera, and I basically documented my friends.”

Although Jamel took a liking to shooting and sharing the fruits with his subjects, it wouldn’t be until much later where he decided and deemed himself a photographer. There was more soul searching before he accepted the personal charge of being a visual historian.

It was the struggle with navigating a blighted ’70s New York City as a young black man that led Jamel and many others to the Autobiography of Malcolm X by Alex Haley. It was the honest account of Malcolm that inspired Jamel to even take on the name Shabazz after this prince that had personified transformation.

“Malcolm’s transformation from street hustler to activist helped me to define my purpose as a man, and photography and the camera became the tools that enabled me to communicate with my peers about life and responsibility.”

Jamel recalls the experience of photographing his friends, and the community around him, as a nurturing exchange—it could be described as magical. Producing a physical picture was the tangible reward, but it was something special about taking these pictures, something fortifying between the two parties.

“Once I began photographing my peers, then I realized the magic it was to make people feel good. It gave me an opportunity to tell people they were beautiful and special. And I saw how smiles resonated from those words, those compliments. Those interactions really encouraged me to move forward.”

Much of the work Jamel produced was of straight-on portraits of radiant blacks and Latino inner-city youth smiling. They looked proud and had a sense of ownership of themselves, and even the composition of the portrait. 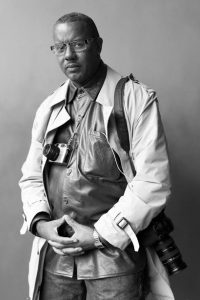 “When I approach people it’s about sincerity. Listening to the stories of my subjects, really taking the time to hear their stories will produce a smile on their face. It creates a relaxing environment. You would have thought I’ve known them forever. Why? Because I made them feel comfortable. You have to be sincere.”

These portraits, shot over a 20-plus year period, made its place in the world in 2001 with the publishing of Jamel’s first book, Back in the Days (published by powerHouse Books). It is a collection of imagery that resurrects memories and visuals many people buried in their minds as time moved on. Flipping through the thick, oaktag pages are portraits of late ’70s and ’80s youth that rocked cut-off Gloria Vanderbilt jean shorts, brown and black leather bombers, fat-laced shell-toe Adidas, Kangols, boom boxes, and Cazals. The vintage subject matter of Back in the Days discovered a sleeping desire among artists and lovers of photography. The urban and fine art press began national conversations on this new photographer with priceless images of yesterday. Back in the Days was a huge success. There began Jamel’s world tour.

“I love that people appreciate the history in these ’80s pictures. I’m surprised and humbled at the impact they’ve had. These images have been seen all over the world, and young people have a connection to these young people in the photographs. It’s truly amazing.”

He went on to say, “I also feel charged to show the next generation the beauty of photography. I could document negative things or I could document images that give life. I like to call it visual medicine for people, it shows hope, healing and progress.”

After the breakthrough of Back in the Days, Jamel’s next book, The Last Sunday in June, chronicled the Pride Day parades that are held annually in New York City’s Greenwich Village. The third time around was a highly potent collection of work, also published by powerHouse Books, entitled A Time Before Crack. The images grew slightly darker, more serious and hard. It was the early to mid ’80s and Jamel had just arrived back in New York City after serving a brief three-year stint in the military. He would soon take on a position in corrections that would evolve into an almost 20-year career.

“It was like I saw crack and violence coming ahead. So I wanted to use my camera to show them. I would take to the streets, photograph them, but also encourage them to stay in school. Inspiring people really gave me my determination and motivated me throughout the years working with so many incarcerated young people.”

His latest book, Seconds of My Life, is a retrospective of Jamel’s 27 years of doing street photography. The fact that Jamel has carried his camera with him every single day of his life is evident in the diversity of his body of work. Jamel has shot fashion, documentaries, portraits, and more which make up his collection of over 100,000 images he keeps safely in his Long Island home he shares with his long-time wife and daughter.

Of nearly a half-million created images there are three that stand out the most for Jamel:

“An image I made of the birth of my good friend’s son at his home. It includes the mother and a midwife, as the child first breaches the womb. This was one of my first dynamic images made in 1981.

The second image is of a young man that was murdered in a case of mistaken identity. What makes this image so profound is the fact that his biological brother is transfixed as he looks into the casket at the face of his brother.

The third is of a young fireman sitting on rubble that was once the World Trade Center, shell shocked by the devastation of the events that unfolded on September 11, 2001, just hours earlier.”

With being on the ground with camera in hand, motivating young people, perhaps this could be a sort of visual activism?

“In regards to being an activist, I do not like to place titles on myself, however, I am extremely concerned with the conditions within the African-American community, and I am proactive particularly amongst the youth in trying to make a difference. The camera has allowed me to communicate with young people on so many different levels. For one, when I request to capture their image, I explain to them that they are beautiful and have a special place in this universe, and that they hold the keys to make this world a better place. Often times they have never heard that, so it helps to instill a sense of self worth and purpose. Secondly, I share with them the importance of education and the need to set goals and objectives in order to have a secure future. These few attempts have gone a long way, and I have seen the results as time passed of these conversations and how a few words of encouragement can go a long way.”

The list of photographers inspired by the works of Jamel Shabazz continuously grows. He counts Leonard Freed’s silver gelatin photography, as well as the outreach of NYU professor, historian and curator Deborah Willis, and the documentary work of Joseph Rodriguez.

One principle Jamel lives by is to keep giving, to reach out to those who will come after you. “I grew up with the philosophy and practice of each one teach one. Older folks approached me, they looked after me. They shared information with me and expected me to share with my community and younger people especially.”

For aspiring and emerging photographers, Jamel advises humility while composing. “To be a good street photographer you definitely have to be humble, take your time with subjects, and not rush.” Jamel stresses the importance of connecting with the subject, “I am a street photographer who always asks for permission to take my subjects photograph. In all of my photographs people are looking directly at my camera. They are connected. It’s all about their eyes. I’ve engaged in conversation with them. The connection means a lot to me. It’s virtually the most important thing of the process of composing.”

“In my opinion, art and photography are divine gifts, and it would be ideal if the recipient was to use his/her talent to inspire and educate. One of the most important lessons I learned as an artist is that I have to be thankful for having the ability to see and utilize this wonderful gift to create.”