Throughout Nicole Sealey’s debut poetry collection, Ordinary Beast, there’s an idea that repeats and reverberates: death. The inevitability of our collective demise—and all the beauty we make “with our brief animation” (“Object Permanence”)—is the impulse that animates these poems. “Give me tonight to be inconsolable,/so the death drive does not declare//itself, so the moonlight does not convince/sunrise” she writes in “Imagine Sisyphus Happy.” Yet despite the air of mortality that hovers about each poem, there are also these: humor (death’s better half), and unabashed, unself-conscious love. These are life’s inevitabilities, assurances, joys—and the spark for countless poems throughout time. With her own distinct voice, Sealey joins a lineage of poets who ask, What does it mean to be alive?

My former coworker/boss/workshop peer and I exchanged questions and answers via email.

Kyla Marshell: Congrats on the publication of Ordinary Beast! Does it feel like it’s been a long time coming?
Nicole Sealey: Thanks, Kyla! You know, it actually doesn’t feel like it’s been a long time coming. It feels like everything is happening as it should, when it should. I’ve been writing poems for more than a decade, but hadn’t committed fully until six or seven years ago. And, honestly, before Halloween of last year, I didn’t even have a completed manuscript for editors to consider, much less publish. My chapbook, The Animal After Whom Other Animals Are Named, wasn’t out a year when I signed the contract for Ordinary Beast.

I’d been talking with Dan Halpern, publisher and president of Ecco, for months, but hadn’t assumed Ecco’s interest. It wasn’t until early November, when, over dinner, after Dan read the finished manuscript, he said outright, “I want to publish your book,” that I realized what was happening. Though we’d been in touch for damn near a year about my work, I was still very surprised. Dan, with so much warmth, said, “Of course—what did you think?” It was a sweet and humbling moment. Which is to say, I feel lucky to have an opportunity that I probably don’t deserve, but that the gods saw fit to gift.

KM: That’s so surprising to hear. What triggered your decision to commit to poetry more fully?
NS: I began thinking about poems that I hadn’t yet written, but wanted to write, and became quite sad. What if I never write these poems?

I was working a full-time job at the time and had been doing so for nearly eight years. In those eight years, I wrote some, but didn’t finish much. Not that one can’t have a full-time job and write steadily (people do it all the time!), I, however, wasn’t yet one of those people. Poetry was still very new to me and required an insight only a complete immersion could provide. So, immerse I did. I left my job and formally began studying poetry for the next two years at NYU. It was one of the hardest, most risky decisions I’d ever made but, I see now, my happiness depended on it.

KM: What range of time do these poems cover?
NS: The earliest poems date back to 2005 or 2006 and the most recent were written earlier this year, but all the ideas and images were cultivated over time. I can hold on to ideas, images as well as lines for years until opportunities for exploration or inclusion present themselves. And, of course, subconsciously, while living, I’m gathering material that I trust the future-, slightly-smarter, more-mature me might be able to treat.

I still have a question or two about images in Ordinary Beast. “It’s Not Fitness, It’s a Lifestyle,” for example. Even now, with the “finished” book in my hands, I’m still debating whether I should specify the bird in the poem by its common name or be vague. As it reads now, the bird is just a “bird” flying around inside an airport. For sound and specificity, should it be a sparrow? Can specificity work, considering the bird is flying so fast “I can’t/make out its wings”? If I can’t make out its wings, how can I make out type?

With all this in mind, more accurately, the range of time these poems span is 1979 to well-into-the-future.

KM: There’s a lot of attention paid to first books. What message did you want to send with this one?
NS: Not to sound dramatic, but first books introduce debut authors to the world. First books are first impressions and, of course, I want to make a good one, which, to me, demands that I write the best poems I’m capable of writing. With Ordinary Beast, it wasn’t so much a message I wanted to send, as it was an offering I wished to give. As such, these poems aren’t trying to teach readers but, rather, communicate with them. The speakers in “Candelabra with Heads” and “In Defense of ‘Candelabra with Heads,’” for example, directly engage readers in conversation, while other poems in the collection make statements, as one would during conversation, to prompt a back-and-forth.

KM: How did you come to writing in form, and why do you use it?
NS: I came to form through that Cave Canem workshop taught by the great formalist Marilyn Nelson that both you and I participated in eight years ago. Before that, I dabbled, but would never really come back to poems written in a form other than free verse—I’d get frustrated immediately and throw in the towel shortly thereafter. From that workshop, I learned that I could stand to be more patient with and diligent in my work.

I use form because it requires that I be my most deliberate, which is something I aspire to in my work and in my life. The traditional sonnet, with its fourteen ten-beat lines and rigid rhyme scheme, can encourage even the most tangential poets to cut to the chase.

KM: You’ve said before that you write poems very slowly. Can you describe, in detail, how you write a poem?
NS: Yeah, I definitely write slowly. I write line by line—if a line isn’t right, I don’t (can’t?) move on until it is. This probably isn’t ideal, but it has worked for me.

I approach every poem differently, as each poem requires something different of me. “Heretofore Unuttered,” for instance, opens with lines from an abandoned poem I’d written at least a couple years prior. I was so taken with these lines that I’d just stare at them for hours. It wasn’t until I bought an orchid to pretty my office that the poem began to come alive.

As if god, despite his compulsions, were decent
and hadn’t the tendency to throw off
all appearance of decorum, here I am
admiring this single violet orchid.
How lucky am I to go unnoticed
or so I imagine, when, at this writing,
there is a red-tailed hawk, somewhere,
tracking the soft shrills of newborn songbirds.

“Cento for the Night I Said, ‘I Love You’” took me a little more than two years to draft. Months were spent scouring hundreds of poetry collections for lines. After which, I began piecing a puzzle, which had no fixed pieces, together. Dozens of papers with dozens of lines by dozens of poets were spread across my dining room table and floor for the better half of 2016. I experimented with combinations of lines until combinations were exhausted and did so with each section of the cento, of which there are twelve. On top of that, I imposed my own rules. The cento had to be comprised of 100 different lines by 100 ethnically diverse poets, of which at least 50% had to identify as women. 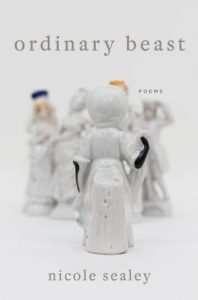 KM: I love the cento, and how, despite being comprised of others’ work, it still sounds very much like you.
NS: Thank you—that’s what I was going for. I was concerned that the cento might read like disparate voices vying for a place, so I was very careful about the selection and arrangement of lines, and equally careful about the arrangement of each section and the poem’s placement in the book itself. It took me some time, too, to understand that each line couldn’t function on the same level. As much as I wanted to include all heavy-hitting lines, some lines had to serve a less conspicuous purpose, getting the poem from point A to point B for example.

KM: I was so glad to see your Brad Pitt poem, “An Apology for Trashing Magazines in Which You Appear” in the collection. 1) How did that poem come about? and 2) How, in selecting and ordering poems in this collection, did you balance the multiple tones—dark, morose, wry, comic?
NS: That poem was actually inspired by Denise Duhamel’s sestina to Sean Penn, entitled “Delta Flight 659,” in which all the end words of each line are variations on “Penn.” I thought the idea was brilliant and decided to try my hand at it. I chose Brad Pitt because I had the biggest crush on him when I was a teenager and, like “Penn,” “Pitt” lends itself to playful variations.

There were definitely expectations each poem needed to meet, respectively, to be included in the collection—though I knew those expectations only after they had been met. I want to say that the poems had to be as good as or better than my favorite poem in the collection, which I won’t name. In terms of the order, my process was mostly associative, linking ideas or images to the next. And, of course, I enlisted the help of my husband, who has a talent for all things poetry.

KM: You have a wonderful series of poems titled “Legendary” about the stars of the film Paris Is Burning. What is it about Pepper LaBeija, Venus Xtravaganza, and the others, that you connect with?
NS: I kid you not, I’ve seen Paris Is Burning (in part or entirely) at least 200 times. I connect with the stars of the documentary film because they epitomize everything I want to be: talented, brilliant, self-assured, driven, kind, quick-witted and beautiful. That they were all these things in spite of their systematic oppression is a testament to the supportive communities to which they belonged and their individual characters.

Also, believe it or not, I was my high school’s homecoming queen and ran for Ms. Kappa Alpha Psi in college (I came in third), so the pomp and circumstance of it all pulled me in.

KM: Both your chapbook and full-length collection reference “animals” or “beasts.” Is there something inherently wild to you about our human existence?
NS: All of it is wild—that we happen to walk upright, wear clothes and communicate with language doesn’t make the human experience any less wild. The idea that we are incapable of wilding is itself anthropocentric, especially when we so often disprove this theory. What’s wild is how super-sophisticated man believes himself to be, even while treating others and the environment badly.

KM: What, for you, is the connection between death and love?
NS: They’re both inevitable. Do you remember who said that there are only two things certain in life: death and taxes? …I would add love to that list of certainties.

KM: In your observations of living things, do you naturally see that potential (or inevitability) for death?
NS: Yes. The poet Ross Gay once said, “we’re watching each other die slowly.” That statement is profoundly true, as we’re literally witness to the slow deaths (or long lives?) of one another—whether it be by time or disease, both of which ravage the body and mind. But the fact that death exists and is inevitable doesn’t negate the fact that we live and love. Life and death exist at once.

Kyla Marshell’s work has appeared in BuzzFeed, Gawker, The Guardian, O, the Oprah Magazine, among others. She has received fellowships from Cave Canem and the MacDowell Colony, as well as a Jacob K. Javits fellowship. She is a graduate of Spelman College and Sarah Lawrence College, where she earned her MFA.