The Underground Railroad
by Colson Whitehead
Reviewed by Sidik Fofana

The Fugitive Slave Act of 1850 is caked in jargon. The gist of it is this: a slave is a slave no matter where she is. South Carolina or Massachusetts. If she has run away and is caught, she is to be returned. She is a carefully labeled piece of luggage.

As far as narrative implications go, the dynamite crackles: no matter how far any slave escapes, there always looms the threat that she may be recaptured and restored to her original state of bondage. 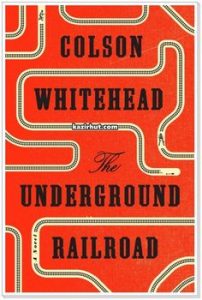 The Underground Railroad By Colson Whitehead (2016)

Colson Whitehead’s The Underground Railroad is the next in a line of reimagined antebellum dramas which has recently included films like 12 Years a Slave and Birth of a Nation, novels like James McBride’s The Good Lord Bird, Sue Monk Kidd’s The Invention of Wings, and Yaa Gyasi’s Homegoing; and non-fiction oeuvres like Annette Gordon Reed’s The Hemingses of Monticello and Ibram X. Kendi’s Stamped from the Beginning. The difference is Whitehead tends to write secondarily about race. He writes about poker and zombies and disillusioned elevator operators first. But, it seems that even the most eclectic writers of color have obligations.

In The Underground Railroad, we meet Cora, an outcast slave. She is known to talk to herself and throw fits. All that she owns is a tiny secret garden where she grows her own yams, which of course is ironic as she does not own herself. When her slave owner dies of kidney failure and the plantation is bequeathed to his cruel brother, Cora is offered an opportunity to run away with another on-the-margins slave named Caesar. She turns it down at first ( “to escape the boundary of the plantation was to escape the fundamental principles of your existence: impossible” ), but things become unbearable and the two finally set off for the wilderness. After a run in with the “law” results in the death of a bounty man’s son, the two slaves flee to the underground railroad. However, this is not Harriet Tubman’s underground railroad, that historical network of undisclosed houses and pit stops for runaway slaves, but an actual rural subway system replete with freight cars and magical negro conductors and destinations as mythical as the lost city of Atlantis.

Cora appears to be another one of the line’s successful commuters, until her stay in South Carolina with an independent community of progressive free souls turns out to be a sick experiment in eugenics. From there, she is cooped up in the attic of an abolitionist. Of this, Whitehead cannot resist indulging in the irony: “On the plantation, she was not free, but moved unrestricted on its acres, tasting the air and tracing the summer…here, she was free of her master but slunk around a warren so tiny she couldn’t stand.” All the while, hot on her heels, is the notorious slave-catching Ridgeway, a man who has never met property he could not return.

Whitehead tells the story very deliberately. Acts of violence and cruelty in the novel are mere matters of fact. At one point, Cora, in her hiding, comes across several hanging corpses who are sparsely described as, “trousers black where their bowels emptied when their necks snapped.” She witnesses a live lynching of another girl who is simply “led up the stairs” to her reckoning. The antiquated ideology isn’t punctuated either. One slave is casually taught the Declaration of Independence since “a bird can be taught limericks, a slave might be taught to remember as well.”

Slave narratives are tough. How can one compete with facts? No matter how wicked the imagination, it is always superseded by the unseemly reality of the truth. Yet at its rawest, The Underground Railroad is the study of a fugitive slave, whom hindsight has proven is on the right side of the law. And so, it is inherently gripping.

The wound from slavery’s legacy may never heal properly, but as it scabs, the fiction surrounding it has taken a slight turn for the fabulistic. Cora is in some ways like D’Artagan or Ali Baba, a heroine steeped more in lore than conceived from deep sociological excavation. The Underground Railroad may desire more from its main character at times, but it succeeds at the most visceral level: that of black woman vs. American patriarchy. On that most crucial plain, the novel is fast, tumbling, and very necessary.

Sidik Fofana has written several publication including the Source, Vibe, and allhiphop.com. His work appears in The Black Male Handbook: Blueprint for Life edited by Kevin Powell.