How might sonnets about a suburb’s past incite conversations on racism? While poetry may seem inadequate to many at achieving this feat, Wendy S. Walters’s Troy, Michigan takes significant strides toward undoing this perception. Even the most mundane of rationale falls into question: “Back then a fear of strangers did not feel / small-minded. Too many outsiders lived / in neighborhoods. Why not predict trouble / from mixing?”

Walters’s preceding volume, Longer I Wait, More You Love Me (2009), found the writer engaged with the long poem and experimental narrative structure. In Troy, her use of the prose sonnet to grapple with history, psychology, and autobiography further exhibits her ambition and dexterity. Ten-syllable lines set pace as each poem streams by cinematically, excited by action but contained within its perimeters. Walters places characters into landscapes and, with the characters, the landscapes move:

Leaves on tall boughs make the sound of applause
in the distance. When rain bends trees, here comes
longing. A girl studies the plot of these
woods for proof of her feelings–a tangled,
shadowy boscage, the creekbed’s stalled mud.

Each section acts similarly to the sonnet’s constraints, providing order to the steep project of considering a history of one of Detroit’s suburbs. Themes include mythology–a reference to Troy’s Greco-Roman name–the town’s founding, city planning, geography, and the biographical.

As discussions on racism in the United States prove imperative–and their absence, dangerous–the scope of the work is only fitting. In engaging the history of her hometown, Walters grapples with a piece of American history, and the history that informs the complexities of our present. All of us, indeed, have stories to tell, and Troy, Michigan shows us that to document means to take action.

Justin Allen: You grew up in Troy, Michigan, a suburb of Detroit. What’s the city’s relationship to its suburbs?

Wendy S. Walters: The suburbs of Detroit tended to be more affluent than Detroit proper, at least during the time I write about in the 1970s and 80s. Detroit had an African American mayor, Coleman Young, and it was coming out of the haze from 1967 Detroit riot, which meant there was a movement of white people out of the city and into the suburbs. Troy was one suburb about 15 to 20 minutes away from the city. It was rapidly building up. A lot of people lived there who worked in the auto industry.

JA: In the book, you engage Troy’s history as well as reference its Greco-Roman name. Though a small place, its history and even its name outsize its contemporary profile.

WSW: In my research I found out that Troy, Michigan was actually named after Troy, New York–not the Greek city, but the town in upstate New York, a very small, sturdy industrial town.

There was nothing that auspicious about Troy when I lived there. It was becoming itself. A lot of the major roads that are there now were dirt roads. Now they’re multi-lane.

JA: You also write about the woods. Were the woods being knocked down as well?

WSW: Yes. There were woods behind our house and clusters of trees all over the town. Kids would wander from their houses, build forts out of fallen trees and things we found at construction sites. This changed after the murders happened.

JA: You write about these murders and the crisis caused by who is known as the Oakland County Child Killer. You also touch on how these murders contributed to racial tension in the area.

WSW: There were other abductions of younger women in towns around us, which were attributed to anonymous Black men. Increasing unemployment in the area gave way to a fear of violence bubbling over from the city.

At the same time, a lot of Black people associated with the automobile industry were moving into the suburbs. These were college-educated people who wanted their kids to be in excellent public school systems. This created another level of anxiety. Sometimes these people were more affluent than the neighbors they were moving in with, which didn’t make sense to those with more provincial ideas about race and class.

Look at them looking like they don’t know
how they look. Why don’t they just stay where they
stay? Or drag sideways across our fields, come
at us zigzag over the rows we cut.
We made a place they know they should not stay
for a reason. They were nothing back when
we started from nothing, or we could not
have worked so hard to be right. They never
do what they need to do to be right. Who
knows? Someone might kill one. We tell them this
if they don’t run. Come on, try us, we say.
A city grows over the rows we cut.
Then they come at us. We stay for reasons.
They don’t understand right the way we do.

JA: In the persona poem “Fear” you speak in the voice of one of these more provincial-minded neighbors. What inspired this gesture?

WSW: It’s difficult for me to understand how people cannot see me as a person. I was trying to inhabit this space, to think about what it feels like to live in a community insulated from broader conversations about foreigners or strangers, and then to suddenly have to deal with it. There’s a certain level where I try to understand that anxiety, and there’s a also place I can’t get to. 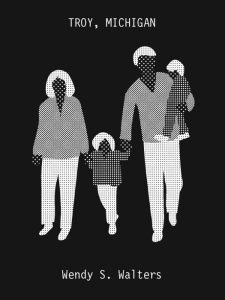 WSW: One poet that does sonnet crowns really well is Patricia Smith. I admire her ambition with them because, though lines repeat, they feel surprising when heard in a different context. For me, trying to tell the history of personalities in a small town was a challenge–how do you make it compelling to someone who’s not from there? I hoped the unity and momentum created by the sonnet crown would raise that local history to a slightly mythic level even though, in plain fact, the details don’t seem remarkable.

JA: A lot of the poems in the book feel mystical despite engaging factual histories. Is this intentional?

WSW: Sonnets are magical in that the information you put into them at the beginning can be as rational as you want, but something happens in the volta that switches the poem into a more mystical place, no matter how grounded you were when you started it. Sonnets are almost like little pieces of technology.

JA: Reading, I found parallels between a sonnet’s formal limitations and a suburb’s geographical and social limitations.

WSW: I thought a lot about the movement that happens within the grid of a suburban map. But also, the movement in someone’s subdivision, or yard, or house. The house may look like all the others on the block, but it has its own narrative and story within it. I thought about the way a sonnet appears: there’s much more happening in them than one would assume by simply glancing.

Because I was wrong to bring up the past,
the writer has drawn a version of me
that insists on being subject rather than
implement. Please think of her face instead
of your own if you want to empathize
with my error. Maybe you see her drift
through the atmosphere, trying to arrest
our pursuit of insight. She will not harm
your memories if you let the writer
mock your need to express awkward feelings.
The writer illustrates our girl’s worries
as a wall of windows. Look out. See how
she waves as she walks up the road? She wants
you to join her, but you can’t catch up.

JA: You also explore limitations of writing about the self. The work engages the lyrical “I” as well as the characters of the “writer” and “our girl,” both in third person singular. Reading, it’s clear to me that, though three characters, they all signify one individual.

WSW: I think about this history in different ways. I think of myself as a character moving through school and through a neighborhood as a six-year-old girl. There’s an innocence to this character because she doesn’t really speak. As a writer I speak, so there’s more risk involved in the portrait of the “I.” The “writer,” in third person, is the one who manipulates the story and determines what parts are told. I could have written solely from memory, but I didn’t feel that introduced enough opportunities to discuss the subject matter, so I fragmented the acting agent into three different parts.

JA: In writing about design and geography, how do you produce affect from the inanimate?

WSW: Blueprints leave evidence of what we thought was important at the time they were created. Places shape us, but most of the time they do so in such a gentle way, we don’t realize we’re made from them.

Justin Allen is a writer from Northern Virginia. He earned his BA in Literary Studies from Eugene Lang College, The New School and has written for AFROPUNK, The Studio Museum in Harlem’s Studio Blog, and Saint Heron. Allen is also one third of artist collective BD GRMMR, alongside friends Yulan Grant and Brandon Owens. He lives in Brooklyn.