Nothing Could Be More Normal: A Review of and Meditation on Claudia Rankine’s Citizen

By now you’ve read Citizen, Claudia Rankine’s book-length lyric that contextualizes this highly charged time in race relations and bears witness to events many would sooner forget.  Unlike some poets of witness who pride themselves on giving voice to the voiceless—as if voice is theirs to give, as if those on whose behalf they claim to speak are incapable of speech—Rankine does not claim to speak for any one.  Citizen is a poetry of preservation and accountability.

Philip Rahv’s essay “Paleface and Redskin” (1938) codifies American authors as either glorying in Americanism or regarding their Americanness as a “source of endless ambiguity.”  Rahv’s limited groupings, however, do not account for the Claudia Rankines, who—to paraphrase playwright and novelist James Baldwin—love America and, therefore, reserve the right to constructively criticize her.  Citizen dares to criticize America and the world at large, but its intent is not to proselytize.  The collection encourages readers, not to see as Rankine sees, but to, at the very least, open their eyes.  And, in rare cases (and with all due respect), close their mouths.

You are rushing to meet a friend in a distant neighborhood
of Santa Monica.  This friend says, as you walk toward her,
You are late, you nappy-headed ho.  What did you say? …

Maybe she wants to have a belated conversation about
Don Imus and the women’s basketball team he insulted
with this language.  You don’t know.  You don’t know what
she means.  You don’t know what response she expects
from you nor do you care.  For all your previous under-
standings, suddenly incoherence feels violent.  You both
experience this cut, which she keeps insisting is a joke… 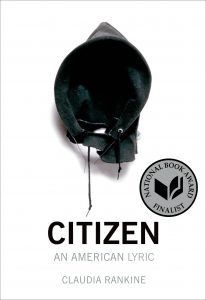 You does not know what to make of her friend’s brash humor.  The friend’s insistence on the comicality of “nappy-headed ho” is not unlike the excuse used by radio host Don Imus, who initially dismissed his infamous phrasing as “some idiot comment meant to be amusing.”  It seems this rationale never gets old.  When a group of people is reduced to inferior status, it becomes easy—if not necessary—to address (read: demean) them accordingly.

Like a scene straight out of Citizen itself, Rankine was in attendance at the 2014 National Book Awards ceremony when host Daniel Handler told watermelon jokes in reference to another black writer’s supposed allergy to the fruit.  Handler later apologized for the faux pas via Twitter, posting: “My job at last night’s National Book Awards was to shine a light on tremendous writers…and not to overshadow their achievements with my own ill-conceived attempts at humor. …”

Even after our talks about Citizen, no matter how many times I ask her not to say the word “nigger,” she insists, when retelling an anecdote in which the word was originally said, on telling it word for word, nigger and all.

The tension in Citizen is palpable.  There is no locus amoenus in which to escape.  While in the United Kingdom, one of the book’s unidentified yous withdraws to the least noisy nook in a home where a party is being held.  A novelist approaches you with “the face of the English sky” and what reads as affinity in his eyes.  The pair begins to discuss the shooting death of unarmed Mark Duggan, a black man and suspected drug dealer, by Scotland Yard’s special gun crime unit assigned to black neighborhoods, and the riots that ensued.

Will you write about Duggan?  The man wants to know.
Why don’t you?  You ask.  Me?  He asks, looking slightly
irritated.

How difficult is it for one body to feel the injustice wheeled
at another?  Are the tensions, the recognitions, the dis-
appointments, and the failures that exploded in the riots
too foreign?

Though initially sympathetic, the now-irritated novelist struggles to see himself in Mark Duggan and, thus, fails to recognize the humanity of you, with whom he is in intimate conversation.  Even so, his response is not without basis considering the construction of race, which leads readers (at least this reader) to assume “the man made of English sky” is not black.

While in graduate school a professor assigned Black Life, a collection of poems seemingly having nothing to do with black people and everything to do with the attitudes and images the color black connotes.  A “black life,” as the author describes in the title poem, is “full of abuse… Dark purple monsters that are so full of blood they are a darkish bluish red.”  This rendition substantiates claims Malcolm X made in his autobiography: Society cultivates a distaste for all things black.

Rankine does not let up, nor should she.  “Stop-and-Frisk,” one of the collection’s situational scripts created in collaboration with photographer John Lucas, offers episodes in which police officers  shake down unsuspecting motorists. Lest we forget, Rankine reminds readers that there are those who are expected to respect authority and others who are taught to expect it, those for whom laws apply loosely and others for whom laws (written and unwritten) apply with a vengeance.

Such incidents, Citizen illustrates, are not isolated.  New York City Police Department’s Stop-Question-and-Frisk program permits police to stop and search pedestrians based on suspected criminal activity.  According to the New York Civil Liberties Union, during the first third of 2014, police stopped 38,456 New Yorkers.  Of those, 54% were black, 27% Latino and 12% white.  Well over 80% of those stopped and harassed were innocent.  These “routine stops,” essentially, are routine only in that they happen to the same groups of people over and over again.  The following refrain attests to and intensifies that fact.

And you are not the guy and still you fit the description
because there is only one guy who is always the guy fitting
the description.

I’d been browsing the shelves for a few minutes, even interacting with one of the associates, asking about one of the products and made my way to the counter to complete my purchase.  During my transaction, the cashier asked to “peek in my bag.”  Confused, I asked, “Peek? Peek where?”  Surely, she could not mean my purse.  She was, indeed, asking me to show its contents.  In a state of confusion, I complied.  She looked inside and, apparently satisfied I had not stolen anything, proceeded to ring me up as if nothing could be more normal.

Citizen is compelled by more than mere circumstance.  Claudia Rankine’s deadpan delivery builds tension and, in an unexpected psychological reversal, emphasizes urgency. Rankine, author of four previous collections and the recipient of countless honors, manages the work, careful not to bend it to her will. Readers will either personalize each incident like congregants would a Sunday morning sermon or be amazed at the frequency with which such incidents occur.  As the judges’ citation for the Jackson Poetry Prize notes, “[Citizen does] the work of art of the highest order—teaching, chastening, changing, astounding, and humanizing the reader.”

Nicole Sealey is a writer. She lives in Brooklyn with her husband, poet John Murillo.