William Demby’s last novel, King Comus, languished for 10 years as an unpublished manuscript. Demby began writing the novel in 1980 and after working on it sporadically over the years, finished it in 2007. Despite his impressive literary credentials, he couldn’t interest anyone in publishing it before his death at age 90 in 2013. But author Ishmael Reed, who had issued Demby’s third novel, Love Story Black, in 1978, under his self-named publishing company, came to the rescue. Reed published King Comus last November after being approached by Demby’s son, James Demby, and Melanie Masterton Sherazi, a postdoctoral instructor in the Humanities at the California Institute of Technology. 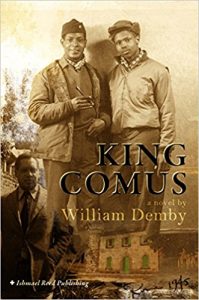 King Comus is a rich, deeply textured novel, a splendid finale to the career of a profoundly gifted and vastly under-appreciated American writer. In just 154 pages, Demby artfully weaves three stories that take place in three different time periods. The first narrative occurs in the early- to mid-19th century and involves the lives of an American slave and master musician named King Comus and his owner, Baron von Gugelstein, a Jewish immigrant musician from Austria. The second narrative relates the World War II experiences of two African-Americans, Tillman and a Demby-like character identified only as D., and their white commanding officer, Joe Stabat. As Demby himself did during the war, D. and Tillman train in an all-black cavalry unit and wind up being dispatched to Italy.  The third narrative occurs in the 21st century as Tillman and Stabat engineer a surprise reunion with D., who lives near Florence, Italy. D.’s two friends bring along with them a mysterious young black gospel singer named Little Antioch. She will be the star performer in a two-day gospel music extravaganza in Rome that Stabat has planned. At the insistence of Stabat and Tillman, D. reluctantly accompanies them to Rome for the musical concert.

As the novel shifts back and forth in time between the slave years, World War II and the 21st century, parallels, connections and common themes emerge in the three narratives. As in Demby’s other works, race plays a central role in King Comus.  But Demby handles racial themes in this novel in a nuanced, unconventional manner, just as he did in Love Story Black, Beetlecreek (1950) and his masterpiece, The Catacombs (1965). He explores the complexities of the historic relationship between slaves and masters, blacks and whites and, in particular, blacks and Jews. Throughout the novel, Demby plays with the ambiguous nature of memory and reality and the elasticity of time.

D. and Tillman, who is a direct descendant of King Comus, are the primary narrators. Tillman is an especially entertaining storyteller — comical, colorful, sometimes profane and always insightful. Demby writes in long, labyrinthine sentences that sweep the reader along as D. gradually discovers the history, myth and meaning of slave/musician/family founder King Comus.

Demby was born in Pittsburgh in 1922 and, after graduating from high school, moved with his family to Clarksburg, W.Va. After serving in Italy in the U.S. Army in World War II, he graduated from Fisk University and returned to Italy to study art. While living in Italy in 1950s and early ‘60s, he wrote Beetlecreek and The Catacombs and magazine stories on travel and the Civil Rights movement and earned a living translating movie scripts into English for many Italian directors, including Fellini, Visconti and Rossolini. He moved to New York in 1965 to work as a copywriter for an advertising agency. From 1969 to 1989, he taught English at the Community College of Staten Island and wrote Love Story Black and Blue Boy. From the mid-‘60s to the end of his life, he split his time between the New York City environs and Italy. He died in Sag Harbor, N.Y., where he had lived part-time since 1979.

Sherazi, who edited King Comus after Demby’s death, explains in an afterword that she chose not to correct some of the book’s inconsistencies in some characters’ ages or to resolve questions about certain relationships. She notes that some of these inconsistencies and questions may be part of the novel’s fabric, which involves storytellers whose memories are uncertain at times. Because she couldn’t consult Demby, she decided to leave them in. The few discrepancies in the book cause very minor confusion and don’t detract from the novel’s power.

The publication of King Comus after a 10-year wait and a two-day William Demby Symposium planned for May 31 and June 1 at the University of Rome in Italy signals a revival of interest in a writer who richly deserves it.