An air of mystery clings to the writing career of William Melvin Kelley like a morning mist. In the 1960s, Kelley produced three novels and a book of short stories that established him as one of America’s most talented young fiction writers. With his first novel, A Different Drummer, published in 1962, he made a resounding splash in the literary world, winning awards and earning comparisons to William Faulkner. But after his third novel, Dunfords Travels Everywheres, was published in 1970, the books stopped.

Such a long publishing drought usually means the writer has nothing more to say or has died. Kelley, a 74-year-old African-American who has lived in Harlem for the past 30 years, understands the confusion caused by the perception that he’s been silent for the past four decades.

“My name just kind of faded away,” he said in a recent telephone interview from his home. “There are still people today who say to me, ‘Oh, I thought you were dead.’”

But Kelley, who speaks in a rich baritone voice, is very much alive and active, although he has battled serious health issues during the past 13 years. He survived bladder cancer and receives dialysis treatments. Three years ago, circulatory problems led to the amputation of his right leg.

Despite his medical problems and book publishers’ apparent disinterest in his work, Kelley has never stopped writing. His short stories and essays have appeared in anthologies and in periodicals, including The New Yorker. In 2008, he received the Anisfield-Wolf Book Award for Lifetime Achievement in Cleveland,Ohio. Philanthropist Edith Anisfield Wolf established the annual awards in 1935 to recognize authors whose work has contributed to racial understanding and cultural diversity.

The August 2012 issue of Harper’s Magazine carried Kelley’s perceptive memoir, “Breeds of America,” in which he recounts his personal quest to understand and cope with a race- and color-conscious society. He has written two unpublished novels and two half-completed novels, and has been keeping a daily diary since 1959.

To help promote his work, his oldest daughter, Jesi Kelley, recently started a Facebook page for him. He’s posted some poems about his close-knit family that includes his wife, Aiki, and their two daughters, three grandchildren and great-grandson.

Teaching has been as vital a part of Kelley’s life as writing. Since 1989, he has taught creative writing at Sarah Lawrence College in the Bronxville. It has served as a satisfying outlet for his intellectual passion and creative energy as well as a source of steady income.

The roots of Kelley’s writing talent lie in his upbringing in the Bronx in a family that valued education and achievement. From 1922 to 1933, his father, William M. Kelley, was the editor of the Amsterdam News, an African-American New York weekly newspaper. The influential position brought the Kelley family in contact with the leading writers of the Harlem Renaissance.

But the younger William says he learned the art of storytelling from his maternal grandmother, Jessie Marin Garcia, and from the radio. His grandmother, whose mother had been a slave, told him stories about the family’s complex history. His family tree includes a Puerto Rican revolutionary (his grandfather) and a white man from Savannah, Ga., who became a Confederate colonel and was killed in the Civil War (his great-great-grandfather.)

Radio programs enthralled Kelley in his youth. He loved the Lux Radio Theater, a popular, long-running series of one-hour programs that featured actors from Broadway and the movies engaging in live, dramatic readings from script adaptations. “The Lone Ranger” was another of his favorites. “I always say I learned to write from the radio,” Kelley said. “When you heard the Lone Ranger stories, you knew how to write. Because of radio, I was always good with voices. I could always write believable dialogue.”

Kelley entered Harvard University in 1956 with the intention of becoming a lawyer to contribute to the Civil Rights movement. But reading difficulties caused him to drop those plans and switch to English. Kelley’s reading comprehension was excellent, but he read twice as slowly as the average person. His grades suffered because of this, and he left Harvard without earning a degree. But while at Harvard, he benefited from the instruction of two prominent authors, John Hawkes and Archibald MacLeish, who taught there. His short story, “The Poker Party,” won Harvard’s best-story award. As a result, he soon began receiving inquiries from literary agents.

Kelley says he got the idea for his first novel, A Different Drummer, from a conversation he either overheard in Harlem or read in one of Langston Hughes’ newspaper sketches. In the novel, all the African-Americans in a mythical Southern state decide to leave and move North. This mass exodus is sparked by Tucker Caliban, a farmer who decided to spread salt on his land, burn down his house and head North with his family to start a new life, escaping from his state’s paternalistic and violent racism.

While in Harlem with his father one day in the early 1950s, Kelley believes he overheard two black men discussing the South. “We see white people, and they keep running away from us,” one of the men said. “We shouldn’t even try any more. We should just take a bunch of trucks, drive down to the South and just leave the white people.” But Kelley said it’s possible he read the conversation in one of Hughes’ newspaper sketches in The New York Post about his fictional Harlem character, Jessie B. Simple. When Kelley was a high school senior, he wrote a short story about blacks fleeing a Southern state. In Hawkes’ class at Harvard, he wrote the chapter about Caliban’s destruction of his own property and his flight to the North. He later expanded it into the novel, A Different Drummer, published in 1962. The novel established Kelley as a new literary star and helped him break through what he calls “a literary ghetto.” 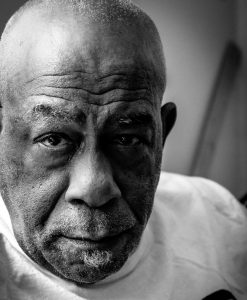 His impressive book of short stories, Dancers on the Shore (1964), marked the debut of several fictional characters that would reappear in his work. One of most entertaining is Carlyle Bedford, a Harlem hustler who could be a literary cousin of Jessie B. Simple.

Kelley’s second novel, A Drop of Patience (1965) revolves around Ludlow Washington, a blind African-American jazz musician, thrice alienated from society-at-large by his blindness, his race and his occupation. Kelley uses Washington’s life to reflect the progression of black Americans from slavery to sharecropping to integration. Washington suffers many painful setbacks as he seeks his personal identity and a sense of his self-worth.

To prepare to write this novel, Kelley drew on his memories of a blind Harvard classmate and performed some field research. Accompanied by his wife, he walked around New York City pretending to be blind to get a sense of how a blind person experiences the world. “I would keep my eyes closed,” he said. “I would listen to the sounds of the subway. I used to think there was maybe only one loud sound in the subway. But I could hear about three or four different sounds.”

His next novel, dem, required no field work. He already knew the subject very well. This wickedly funny 1967 satire skewers the many myths the white characters harbor about blacks. Kelley had spent much of his life observing the ways of white folks. He grew up in a predominantly Italian working-class neighborhood in the Bronx and attended grammar and high schools as well as a college with very few black students, “I know rich white people. I know poor white people,” he said. “I know white people.”

In dem, a bored white woman, Tam Pierce, takes a black lover and winds up giving birth to twins, one black and one white. Her husband, Mitchell, a middle-class white man, sets out to find the black co-father. Mitchell’s hunt requires him to enter Harlem, a world that’s alien, fearful and repugnant to him. As he does in much of his fiction, Kelley dramatizes in dem the absurdity as well as the inhumanity of racist attitudes.

In the early 1960s, he listened to a Malcolm X speech exhorting blacks to stop trying to look like white people. “He said, ‘Who taught you to put a stocking cap on your hair? Why do you put whitening cream on your face? Why don’t you like your nose? Why don’t you like your lips?’ It really hit me. That began an investigation of self and of the indoctrination into the (racist) system of America.”

To escape the stress of racism in America, Kelley lived abroad for varying periods of time, first in Europe and then in Jamaica. He and his wife wanted their two children to grow up in a culture that wouldn’t make them feel inferior because of their race or color. That’s why they chose to live in Jamaica from 1968 to 1977.

In his last published novel, Dunfords Travels Everywheres (1970), Kelley creates a mythical foreign country that practices apartheid on the basis of whether a person has chosen a blue or a yellow clothing color scheme on a particular day. Chig Dunford, a Harvard-educated African-American who appeared in some of Kelley’s previous works, tours this strange country with friends. Dunford struggles to reconcile his Harlem roots with his Ivy League education and his white friends. Inspired by James Joyce’s linguistic gymnastics in Finnegan’s Wake, Kelley plays with language in the novel’s dream sequences. He combines standard English with African-American Creole patois and ghetto street argot — often to great comic effect.

Dunford also is the focus of Dis/Integration, a novel Kelley recently completed. He’s still seeking a publisher. In that novel, Dunford lives almost entirely among Euros (Kelley’s preferred term for Caucasians or whites) and only occasionally sees his family. Kelley likens Dunford’s situation to Leopold Bloom’s in Joyce’s Ulysses.

“He’s in society, but he’s not really a part of that society,” Kelley said. “I see African-American kids now who have grown up in the suburbs with Euros, and they’re not African-American any more — culturally, anyway. They don’t know any more about the ghetto than anybody else.”

Kelley doesn’t know when or if Dis/Integration will be published. He can’t pinpoint exactly why he hasn’t been able to get a book published in the past 42 years. “My wife thinks I was blacklisted because I was an early opponent of the Vietnam War,” he said. “I’m not sure about that.” He believes he might have earned a reputation in the publishing world of being hard to work with because he staunchly resisted changes his publisher, Doubleday, wanted to make in Dunfords Travels Everywheres. His absence from the United States for nine years and the emergence of other talented African-American writers in the 1970s such as Toni Morrison and Alice Walker may have worked against him, he said.

But it’s all speculation. No one knows for certain why a writer of his talent and stature hasn’t been able get a book published in 42 years. So the mystery lives on. And so, happily, do William Melvin Kelley and his literary legacy.